Right, so here I am on day three of my retreat, and it turns out I have a little more company than I'd expected. In the next room there is the very affable Pierre, whom I've just got to know a little over a couple of beers. But my own room has other residents as well, in the shape of two little field mice who have somehow found their way inside and set up shop behind my fridge, where they've clearly been doing well enough to have also been able to establish a second home in a discarded tube of Christmas wrapping paper on the floor behind my writing desk.

The mice seem to be more or less nocturnal and thus I became aware of their existence on my first night here, when they woke up me up three times with by making an incredible amount of noise as they tried to chew their way into a bag of pasta the previous (human) resident had left behind. I thought they must be rats to begin with and only on night two, when I snuck out of bed at 3 am with sufficient stealth to pinpoint the source of the noise, did I find out that they were indeed mice, very small mice at that, and that very small mice having a very serious go at the thick stiff plastic bag surrounding half a kilo of fuselli equals a very loud racket.

After a Facetime consultation with my children, I am naming them, naturally enough, Tom Thumb and Hunca Munca.

Despite the fact that the kitchenette stinks of their droppings and will have to be semi-dismantled and professionally cleaned, and that I've had to wash every piece of cookware that was stored in the cupboard behind which they're living because of the extended party they've been having in it, soft-hearted animal lover that I am I've started feeding them.

To begin with I tempted them out from hiding with a couple of cashew nuts, and my generosity was rewarded with a tiny insight into some really smart - and rather touching - animal behaviour. 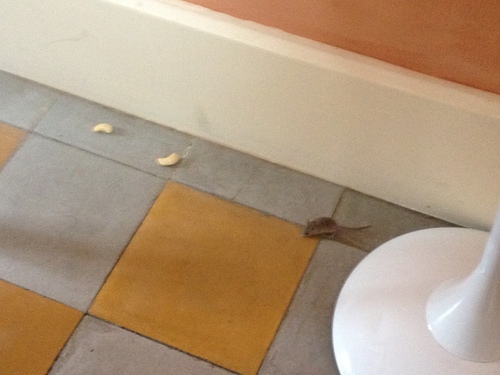 They didn't take the cashews right away. Oh no. Tom - or maybe it was Hunca - emerged to check out the cashews. He (or she) lifted one up as if to make off with it, but she was just testing its weight (given it was almost as large as she was, it wasn't a given she'd be able to carry it). She also had a bit of a nibble, to check it tasted as good as it smelled, which it clearly did. Then she put it back again and disappeared back beneath my desk.

Only later, almost exactly at sundown, did she emerge and carry one of the cashews back to the roll of wrapping paper. A little later, both the mice reappeared and headed for cashew number two. Intriguingly they worked together to carry this, not to the writing desk, which was only half a metre away, but the four metres across the room to their main home behind the fridge, a distance so far that neither of them could manage the nut alone but had to do it together. The transit was achieved with much hilarity, the mouse-nut-mouse assemblage careering across the floor like a rolling, squeaking ball. And Hunca and Tom now had enough grub in both camps to last them at least a couple of days.

After that, all hell broke loose. I'm not sure these mice can actually conceive of me as a coherent other being, but in the manner of a Tom and Jerry cartoon my feet certainly held some kind of existential quality for them - and by the look of it a friendly one, given their association with the food that, cargo-cult fashion, has started appearing from nowhere whenever they're around. So now Tom and Hunca's favourite game is to hop up onto my slippers and run up my trouser leg when I'm working. Which is very cute, very ticklish and very distracting, to the point that I've had to start tucking my jeans into my socks when I'm sitting at my desk. 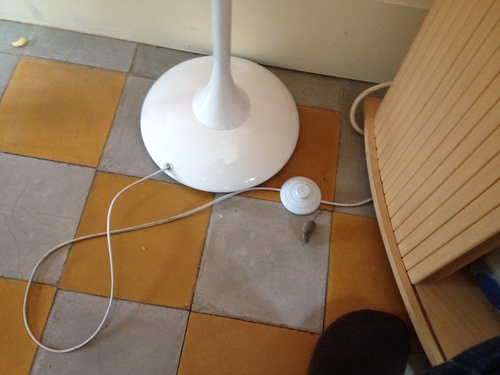 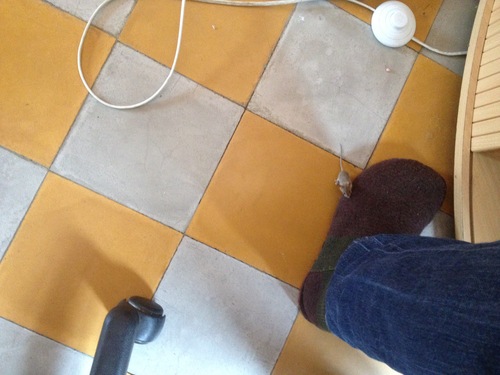 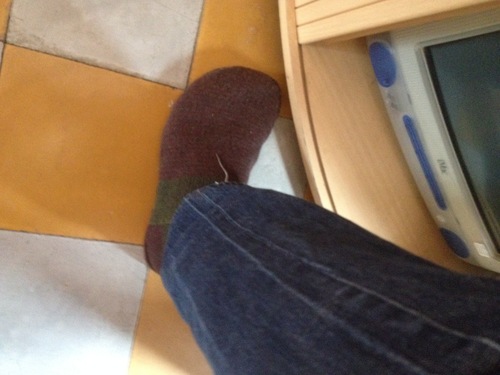 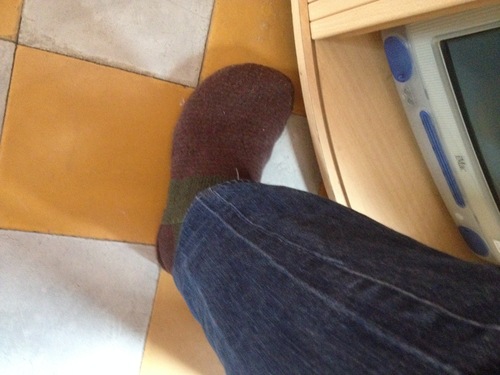 Tomorrow, in theory, we're getting some humane traps so I can catch them and return them to the garden. I'll let you know how it goes. If we succeed I already know that I'm going to miss them.