A couple of months ago I had the final set of editorial notes on Midland from my editor at Unbound, Rachael Kerr, and I've spent the relatively distraction-free lull between Christmas and New Year working hard on the final draft. It's always tricky to know when you've finished a book, especially one that's taken twelve years to write, but I'm pretty sure that it's now done.

There were quite a few last minute tweaks and tidy-ups, but the major change from the draft I completed last year is (surprise!) a new ending. Yep, that's right. If any of you happened to read the version I made previously available in PDF form through this blog, then you've got a fresh read in store (or at least a fresh final chapter) when the printed book arrives in September 2018 or thereabouts.

Here's a picture of a Midlands snow lady, constructed last week in Warwickshire, to celebrate: 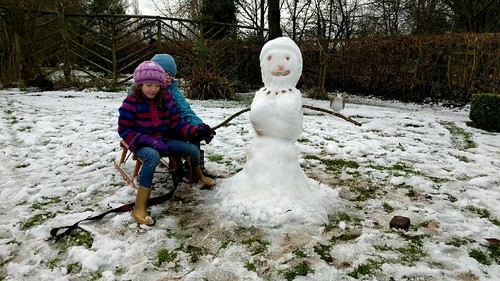 The new draft will go to Unbound on January 8th, and then will enter the publishing process: copy draft, typesetting, cover design, marketing plan, print schedule etc etc. This all takes about nine months (and explains a lot about why the world has largely switched to digital media; dead tree distribution takes tiiiiime). As noted above, if all goes according to plan, you should all get your hardbacks (and/or ebook editions) sometime in October, and the paperback version will arrive in the bookstores courtesy of Random House, about six months after that, in Spring 2019.

In other words, we're only at the end of the beginning. The real life of Midland doesn't even start for another nine months, and I'll be organising the launch party to coincide with that (so those of you who were generous enough to book tickets, expect an invite from me for some time around then). In the meantime I'll be getting cracking on the other pledge fulfilments, in particular the tour of Warwickshire and the paramotoring trip, both of which will probably take place sometime this summer (and there will be full reports posted on this blog when they've happened).

2018 is going to be a Midlands year for me in more ways than one. The novel is in large part a paean to my Midlands childhood, and what's been peculiar about it is that, as I've been finishing it, work has taken me regularly to the Midlands for the first time in my career. Hospify, the healthcare messaging start-up that I've co-founded, has been undergoing extensive trials in the Birmingham area over the past few months, and just before Christmas we had the good news that these trials are set to expand into the new year, so I'm going to be in the area a lot.

Back in September I found myself with a couple of hours to kill in the city centre while waiting for a train, and I took the opportunity to have a wander around. Things have certainly changed since I was a boy, when my father would occasionally take me to spend a day in the offices of his law firm, then called Duggan Lea & Co, if there was no one else to look after me during the school holidays. 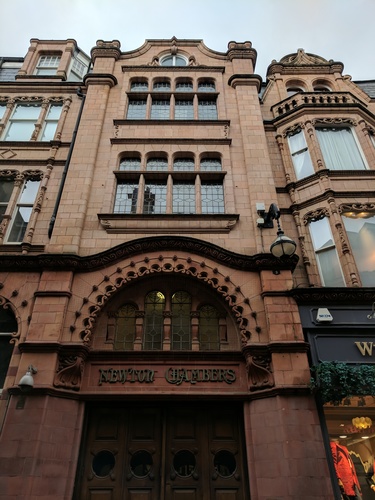 Duggan Lea's home was what I still think of as one of the loveliest buildings in Birmingham: the art nouveau Newton Chambers in Cannon Street. The building has been cleaned up and converted since my father worked there, and is now a plush apartment block, but back then it was covered in soot and cascades of pigeon shit, and felt very Dickensian, as did Cannon Street, which is now all fancied up and pedestrianised but back then was quite a dour, traffic-clogged little cut-through. I loved the building though; its wide staircases, corridors and hallways were the perfect assault course for a nine-year-old boy, and I still remember the ozone smell of the photocopier room (yes, the photocopier took up an entire room), where I often spent entire mornings making dozens of copies of terrible pictures I'd drawn, humoured by the legal secretaries who were pleased to have me out from under their feet. I also saw my first wordprocessor there, an item the size and shape of an electric organ, that displayed a single line of text at a time on its tiny LED screen - a universe away from the laptop on which I'm typing this now. 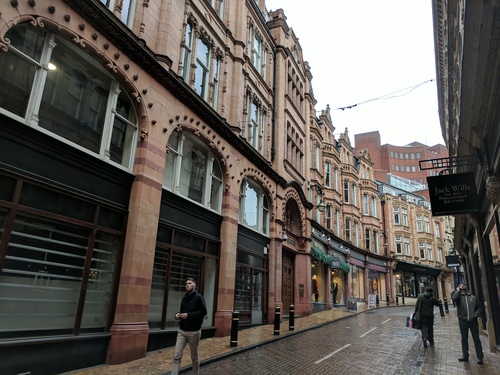 One room that often pops into my mind when I'm thinking about how to design some piece of cloud-based data architecture to perform some online job or other is Duggan Lea's basement archive, a dusty room filled with cobwebs, mouse nests and rack upon rack of contracts and case notes, all rolled up in buff card folders and bound around with mauve or burgundy ribbon. It was a scene straight out of Bleak House, which I read around that time, and the experience of visiting those impenetrable stacks combined with the overwhelming futility of the proceedings of Jarndyce & Jarndyce to instil in me a Kafkaesque view of the workings of the law, a faith in the potential of computerisation to improve data storage, and a love of good writing, all at the same time. I think these three things have formed a close alliance in my consciousness ever since.

Another building I visited was Rackham's, now House of Fraser, seen in the righthand background in the picture below. Still a striking piece of modernist architecture, it features in Midland when Margaret agrees to meet Tony there, in the tea room, for a conciliatory post-divorce talk in 1968 (the year of my birth, by non-coincidence). 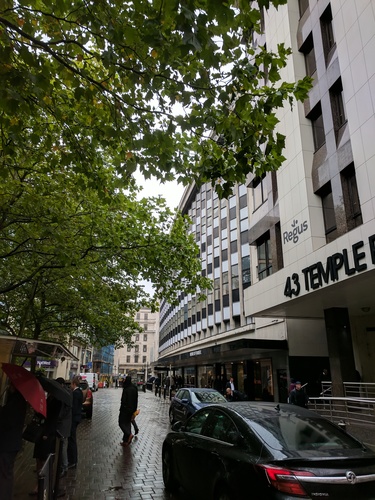 Fading now, like so many of the concrete buildings of that era, it's still worth remembering what a powerful effect that wall of concertina-ed windows had on the city centre in the 1960s, and what a positive contrast it, and the goods on offer within it, presented to the citizens of what was a grimy, industrial town still dealing with bomb damage from the Second World War. It was a view of the future that Margaret bought into, at any rate.

By the time I was visiting Newton Chambers in the late 1970s and early 1980s, that dream was already under threat from the slowdown in British manufacturing and the various industrial crises this precipitated. The concrete revolution that had created Rackham's had also wrapped Birmingham in expressways, of which the famous Spaghetti Junction was the zenith (or perhaps the nadir). The city centre began to suffer from most of the urban ills that characterised those decades, and had become a tough place for a boy to be. Going into Newton Chambers as a little kid with my Dad during the school holidays was one thing; travelling in on the train on my own or with a friend on a Saturday as a teenager, to source back copies of 2000AD at Nostalgia & Comics or clothes at Oasis, and braving hostile gangs of skinheads in order to do it, was another. It wasn't really until the 1990s that Birmingham would start to feel like a vibrant and hopeful place once more, largely thanks to the efforts men and women like my father made to rebuild and improve the institutions that would reknit the town's civic fabric.

And in case you're wondering what I looked like in those days, I went to a school reunion last year and was presented with this: 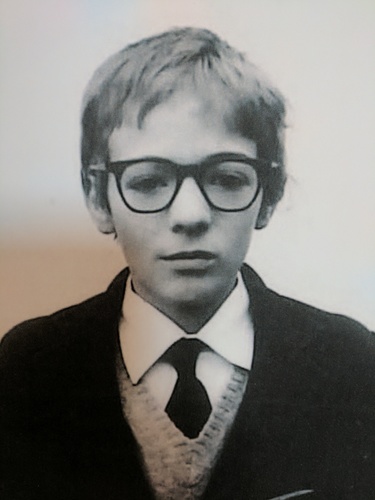 As you can see, I was already working hard on projecting authorial angst, even at that tender age.

Here's a selfie I took this morning, roughly four decades later, sporting the new glasses I've had to buy recently for driving (I had my eyes lasered in my 30s, and haven't worn specs for around 15 years). 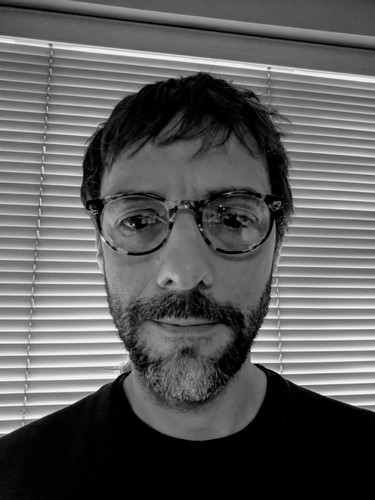 And with that thought, I wish you a very new year to you all, and all the very best for 2018.