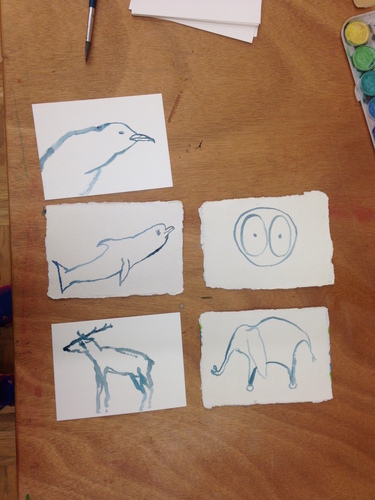 My shed has been a little quiet of late, largely as a result of the Brexit referendum. If you’ve been following me on Twitter or Facebook you’ll know I was a passionate Remainer, and making my opinions felt about the greatest constitutional crisis since the Second World War has taken precedence over blogging about my new novel.

However, despite the imminent break-up of the UK, the collapse of the EU, and the rapidly approaching onset of the apocalypse as described in fellow Unbounder Paul Kingnorth’s novel The Wake (which I now realise is in fact a work of predictive non-fiction), life must go on and, indeed, good things have been happening.

Chief among these is that the first pledge for Midland’s five original artworks has come in. Drawn and donated by the extraordinarily talented Francis Upritchard, these beautiful sketches will decorate the book’s five sections: Whale, Gull, Egg, Stag and Elephant.

Francis lives a short walk away from me in Hackney but is originally from New Zealand and indeed represented New Zealand at the Venice Biennale a few years back. Her drawings usually fetch around £900 each so the Midland sketches are a bargain at £550 a pop, and I’m very excited that one of them has now sold - taking my funding total up to an impressive 37%.

There are still four pictures left so if any of you are budding art collectors (or know someone who is), grab them now while you have the chance: Francis’s work will be appearing at the prestigious Frieze Art Fair this coming October, at which point the value of her work is only like to go up.

To wrap things up, some news about Midland itself. I spoke to my lovely editor Rachael Kerr this morning who has just finished reading the draft of the book that I finished in France in February. She’s given me the thumbs up on the new material, the new structure and the new ending. We’ve set out a schedule for me to do the small amount of additional work that we both feel is required to make sure the story is properly resolved, and I’m going to be getting to work on that over the next couple of months. So we’re very nearly there!

Have a great summer, everyone.