April Fool's Day joke... I finished the new draft of Midland today and sent it in to Unbound.

And the joke is... it's not actually a joke at all! It really happened, and it happened after noon so it wouldn't have counted as an April Fool's joke anyway. My actual delivery deadline was yesterday, but what's a day after ten years of toil?

A fair chunk of this draft has been written at a desk I've been using, courtesy of start-up pals Birdsong, in Canary Wharf. 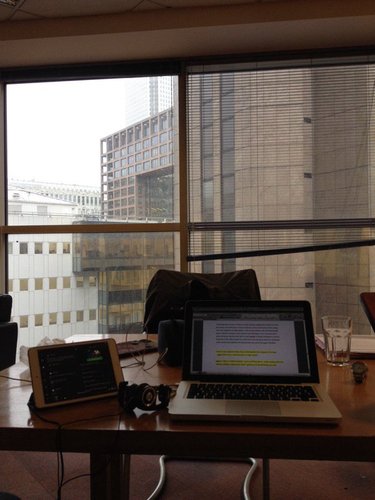 That's 1 Canada Square you can see through the mist, top and centre.

By coincidentally I was working in that tower when I started writing my first short stories around 25 years ago. I had a job working as the postboy on the features desk of The Independent newspaper, back when it still was a newspaper and back when there was still post.

Canary Wharf resembles Jean Luc Godard's Alphaville now, but back then there was little apart from that tower and the small cluster of largely empty office buildings around it. The rest was a giant industrial wasteland of empty lots and abandoned docks, studded with cranes and laced with old railway lines. I used to stare down on it in between shoving letters into the journalists' pigeon holes and teaching the executives how to use the new-fangled network of Apple Macs they'd just had installed, replacing the mainframe Atex system that had been in use in their previous office by the Old Street roundabout.

The view reminded me of the zone in Tarkovsky's Stalker, one of my all time favourite films, and it inspired me to write a short story, The Nuclear Train, the narrative of which connected this landscape with the flat in which I was living in Islington, and which backed onto the railway line that was used at the time (and still may be, for all I know) to carry giant drums of nuclear waste (a fact that also inspired the classic 80s conspiracy thriller Edge of Darkness) down to the docks for sea-bound transport to Sellafield.

In 2002 The Nuclear Train was made into a short film for Channel 4, and you can watch here on Vimeo. Director Dan Saul's animation looks as beautiful today as it did then, and perfectly captured the strangeness of a landscape that has now long-sinced vanished beneath clusters of high rise office blocks and apartment buildings. Even the building I'm writing this in will soon be gone. Barely thirty years old, this summer it's to be demolished and replaced with a brand new 80 storey building, which is why I have a free desk - because everyone here is in the process of moving out and there's temporary space to be had by those who have no desire to stay long.

So here I am again in Canary Wharf, 25 years on, writing stories in the zone where the new displaces the old. It's a place we all find ourselves in sooner or later, and if you pondering that, then why not put ten minutes aside this weekend and watch the film.