A Radioactive Round Table (And Some Heavy Metal) 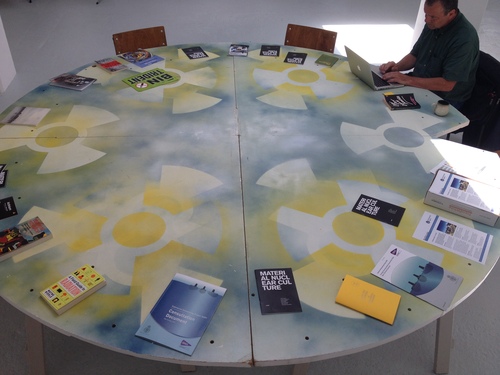 On the way down to this year's Port Eliot Festival I stopped off in Plymouth to check out the Arts Catalyst's Material Nuclear Culture exhibition in the Karst Gallery. This is part of a summer schedule of events in which I'm peripherally involved, and as I was passing I thought I'd drop by to take a look around. What I didn't know was that I'd be greeted by the ghost of an old friend. The exhibition included a recreation of the round table created by James Acord, the inspiration for Jack Reever in my last novel, The Book of Ash.

A self-styled "nuclear sculptor" whose work addressed the issue of the long term storage of nuclear waste, Acord created this table in the 1990s  to host round table discussions between nuclear scientists, engineers, artists and environmentalists in the Hanford nuclear reservation in Washington State. Polarised as they were by nuclear technology, these people as a general rule never met let alone conversed with one other, and Acord saw it as part of his artistic process to bring them together so that they might have the opportunity to see each other's points of view.

The actual table he built survives only in photographs but it has been painstakingly recreated for the exhibition and was used to host a contemporary discussion between artists, curators, submariners and members of the Submarine Dismantling Advisory Group and Nuclear Submarine Forum in Plymouth in June. If you'd like to see my own "round table" contribution to Material Nuclear Culture, it will take place in London on Thursday, September 1, when I'll be in conversation with Julie Salverson, author of the nuclear memoir Lines of Flight. Details here.)

After the exhibition it was on to the festival, about half-an-hour's drive east of Plymouth over the Tamar Bridge. Lord St Germans had decreed it would be the best Port Eliot Festival ever (see my last post), and it was. I heard rumours of 10,000 people onsite, by far the largest crowd the event has drawn to date, and the weather was perfect: not too hot, not too cold, sunny days and skies filled with blustery cumulus holding back the rain until the final curtain had fallen.

To give you a flavour of what it was like here's a shot of a cabaret act in front of the Park Stage... 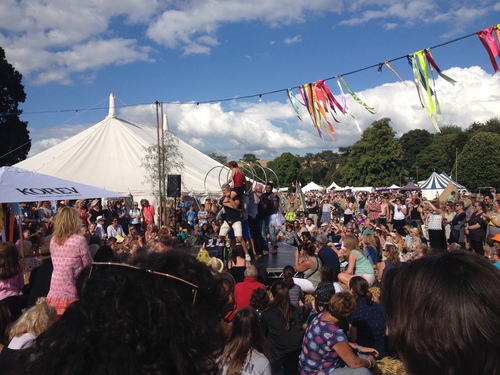 ... and another, down by the estuary (this piano is on wheels and is being simultaneously cycled around by the pianist while a small girl periodically pops out of the top to accompany him on her fiddle). 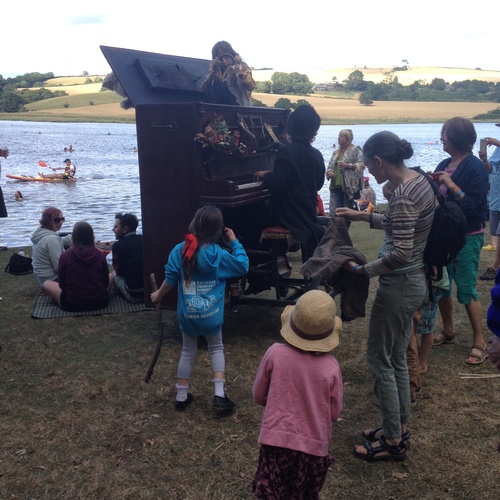 My own reading went pretty well, despite taking place at 10 a.m. on Friday during the only rain of the weekend. Big thanks are due to Matthew de Abaitua (buy his books, they're great), who sat stalwartly in the wet encouraging other punters to brave the elements and give me a listen.

Other personal highlights included listening to fellow Unbound author Paul Kingsnorth read from his new book Beast, and catching the amazing Japanese noise rock band Bo Ningen late on Sunday night. If you get a chance to see them, go. They are transcendentally awesome.

On the way home I stopped off to see an old pal of mine in the picture postcard town of Dartmouth, where the kids went crabbing on the quay while I tested out my big new purchase of the holiday: a selfie stick.

This is how you use it, right? 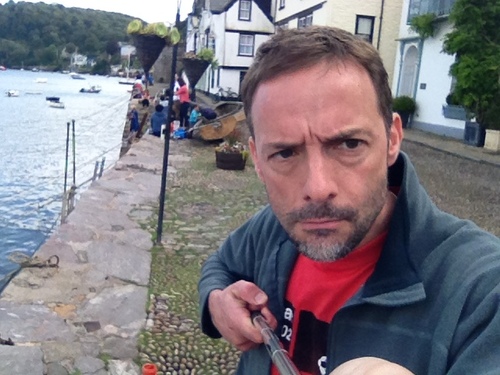 I'm hooked. Expect more pix like this, coming soon to a blog near you...