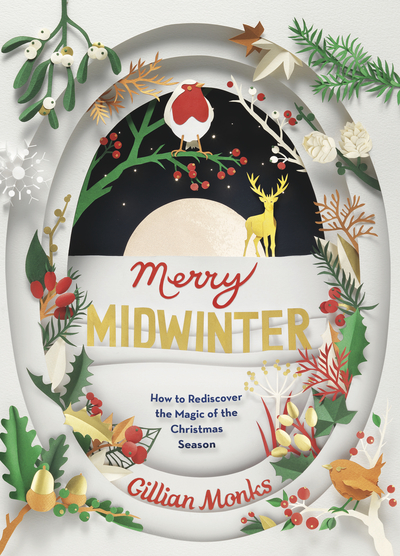 Food & drink | Biography
You made Merry Midwinter a reality. It's available in all good book stores now.
$8
14 pledges

First edition hardback, the e-book
For the first 50 pledgers only
$40  + shipping
17 pledges

First edition hardback, the e-book and your name in the back of the book
$55  + shipping
11 pledges

Participation with the author in an authentic ritual in the heart of Snowdonia to celebrate Midwinter. A whole afternoon of gentle inner nurturing, story-telling, music, candle- and firelight to help you get in touch with the true meaning of the rebirth of the Sun and Light. Plus everything at the Collectable level.
(Limited to 10 people.) December 2018.
Travel to Snowdonia and accommodation not included

Do you love Christmas, but sometimes find it stressful, expensive and over-commercialised? Are you looking for a better way to take a breath and reconnect with home and hearth and other humans? Have you ever wondered why we celebrate the festivals we do, in the ways that we do? And did you know that Santa's reindeer are all actually girls...?

Merry Midwinter is a gentle and warm investigation of winter, which explains why it is important to celebrate the whole season, not just one or two days. It puts into practical terms the physical and spiritual relevance that the solar activity around the Winter Solstice holds for every living thing, and tells us how our most well-known and best-loved Christmas traditions have little or nothing to do with any one religion, but everything to do with the continuation of life and the importance of family and community.

The book contains lots of simple, accessible, down-to-earth ideas about how we can rekindle the true essence of Midwinter celebration by doing and giving of ourselves. Each chapter also includes memories of the author's own unusual childhood of the 1950s and 60s and examples of how she and her family now celebrate. There are traditional family recipes taken from her mother’s manuscript cookery book along with her accompanying seasonal comments. It also has lots of instructions for how to make seasonal decorations using evergreens and other natural items.

The book is completely non-religious – a celebration of life in general and humanity in particular - and demonstrates how we can surmount our different beliefs and practices to come together in loving commonality; a time and season we can all identify with, when humanity can freely share gifts of compassion, recognition and community. Perhaps more importantly, it sets out a potential framework of loving awareness and service for life in general. Celebrating Midwinter is not about what you do, buy, eat or spend but what your attitude to life is. Christmas and Midwinter are a state of mind and a way of life - all year round!
Buy

First edition hardback, the e-book
For the first 50 pledgers only
View all 5 rewards