For a time in St Andrews there was a beach bar named Catch. Catch was originally the café of the Sea Life Centre (now called the St Andrews Aquarium - referred to by an old friend who worked there as the fishy prison). I worked in that place for awhile, and it was feast or famine. When it was busy, it was like people were drinking to prepare for the apocalypse. When it was quiet, there seemed no way to entice a punter.

One summer, a couple of pals took it over and, for the most part, it was famine. I would stumble by after work, I was a sommelier at the time, and drink a beer or two and try one of the cocktails they experimented with to keep the boredom at bay. One of my chefs was partial to the place as well, so we'd shoot the shit about that night's service whilst he sank three jack n' cokes to every one of my beers.

It was a weird place. Perhaps too much of a best-kept secret. The owners of the aquarium ultimately gave up trying to make a nightspot of it. I think it's a yoga studio now, or somewhere similarly unlikely to receive a visit from me.

It was from the deck of the bar that I snapped the below photo. That enclosed bit of the water used to be the town's public swimming pool. The cargo ship was probably waiting for its berth at Dundee. The combination of gorgeous light, blue sky, rain cloud, and rainbow might seem remarkable, but in St Andrews it happened all the time. I'm pretty sure it still does. 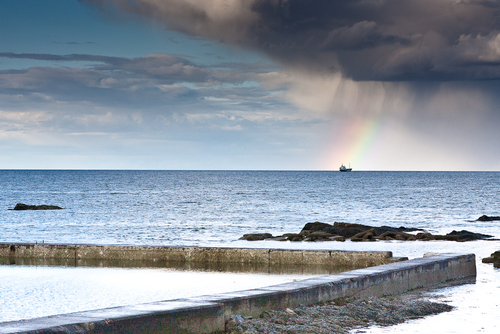 Beautiful photo, Richard! Takes me back, spent some of my youth on St Andrew's beach, figuring out what I wanted to do...still figuring...;-)

Those beaches are perfect for that sort of reflection, John.