By Justin David and Nathan Evans

An anthology of stories from the edges

Kit de Waal, The Weight of my Revenge

I wanted to hurt him back and the truth would serve me well for that. It needed no embroidery, no clothes nor shoes and looked its best naked like a winter garden.

The truth hung heavy in my coat, made me lean and veer but still, from time to time, I would take it out, weigh it, spit on it and whet-stone it sharp on both sides to wound going in and wound coming out.

You’ve been sent for a brain scan. In an MRI scan, a very strong magnet briefly aligns the hydrogen protons of the body along the axis of the scanner. As they relax they do so at different rates in different tissues, sending out different signals, and thus abnormalities can be detected.

You make your way along the hospital corridor with the ringing in your ear, your one ear rather than both, which could be sinister, the consultant said, or maybe not; one chance in a hundred, he said, comfortable and urbane, intending to reassure you, but sending you for a scan nevertheless. One chance in a hundred that your brain is being sent lopsided, your wits, by which you live, upended by an aberrant growth. You follow the arrows, along a floor designed not to cause slips, to hush the footsteps and calm the nerves of those whose lives could be about to veer out of control.

You find the door: Radiography. There’s some kind of disruption going on inside.

I’ve been known to partake of the pleasures on offer, but not often. At sixty-six I’ve long since lost my appeal, except for the odd gerontophile. And to be honest, I so infrequently feel the urge. Nowadays, I’d rather wrap my laughing gear around the firm shaft of a cheap red.

Today, as I was slaking the endless thirst of my demons, trying my best to blot out that great fugue of failure that is my life, quite by chance I solved the mystery of the stolen flowers.

Everything is quiet, and I'm fifteen. When I get to the ticket-hall, it looks like I am going to be the first person to walk across the tiles this morning – I know that, because they're still all wet and shining, despite this early heat – so I stop for a moment to gather my nerve. While I'm standing in the doorway, I can hear myself muttering something. Neil, I seem to be saying to myself under my breath; my name's Neil.

Now, my feet are stepping forward across that evaporating skin of water – and now, I can see my hands resting on the shelf in front of the ticket-office window. What am I saying to the man behind it? Ah yes. Of course; Twickenham.I try the word twice, but it doesn't quite want to come out – Sorry, son, the man is saying – so I clear my throat and try again. I'd like cheap day return, I say –a cheap day return, please, to – but again, the crucial word gets stuck. The man leans forward and asks me to slow things down a bit, so I do what I'm told – and it works, apparently, because now I can see some fingers sliding a sequence of coins under the bottom of the glass, and two cardboard tickets coming back to me. I blush, say Thank you – and then keep the two rectangles of cardboard ready in my hand as I walk across the tiles and towards the waiting ticket-barrier.

I remember not looking at the guard – not wanting him to look at me, or make any attempt to ask me why I am there or what for – and then I remember there being sunlight, absolutely everywhere. I can feel my shirt – my best shirt – starting to stick to my back. I ignore it, and sit there on the bench at the very end of the platform and stare. I'm willing that shuddering dot at the end of line to get closer and burst into being a train and save me.

Signed paperback and Ebook plus you name listed in the back as a supporter. 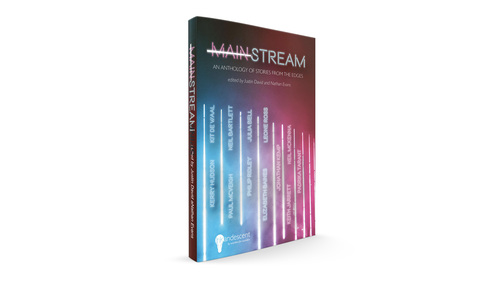 Paperback Bundle of three books; a signed copy of Mainstream plus two other Inkandescent titles plus the Ebook and your name listed in the back as a supporter.
Pre-order now
View all 16 rewards