Welcome! Allow me to briefly introduce myself

Day one done and we've already reached 4% of the funding goal. That's a good start, but we have a long way to go — probably a little more than another 500 pledges. I want to offer my thanks to all of you for diving in right at the beginning; I know these early stages are the most important, but also the hardest to gather support. So I appreciate it very much.

Please keep sharing the campaign on forums and social media and with anyone you know who might be interested. I'll be posting lots of things related to the book here and elsewhere that you can share around as the campaign progresses.

In the meantime, I want to do two things: first, to reiterate that this book is intended for a broad audience — even though it's covering a niche topic. My chief goal is to tell human, relatable, compelling stories about the people behind videogames, and it just so happens that I've chosen to tell the stories of people behind Mac games in particular (the reason for this being that their stories are fascinating and yet such people have never been given much attention).

Second, I want to briefly introduce myself and talk a little about my own Mac gaming background. 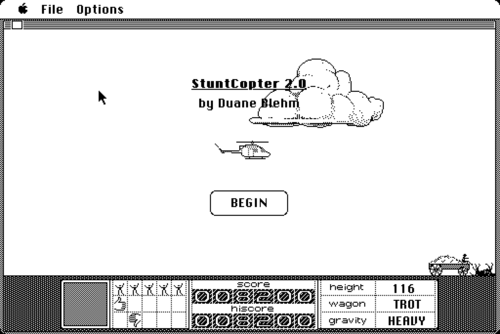 I grew up with Macs. My dad bought a Macintosh Plus before I was born. My earliest computing memories are of that machine. I remember the wonder of Dark Castle's introduction, with the digitised organ riff from Bach's Toccata followed by a flash of lightning and thunder. I remember learning to use a boot disk to start the Mac so that I could then swap in the disk for the puzzle game At The Carnival (which later proved great therapy for my fear of crowds) or one of the little indie games (they called it shareware back then) we had, like StuntCopter (try to drop a tiny, flailing man from a helicopter onto a bale of hay at the back of a moving wagon; the creator sadly died while still a teenager) and Phraze Craze Plus (a Wheel of Fortune homage) and Glider (guide a paper plane through a house).

I deepenend my love for the quirky indie scene on the Mac over the years that followed, and come 2011 when I started writing professionally I made it a point to draw attention to the wonderful creativity at its core whenever I had a chance.

I'll wrap this up with a link to my favourite such instance — a feature I wrote three years ago about Cliff Johnson (the guy who made that At The Carnival game I mentioned before) and his 25-year journey to develop a sequel to his first game.