Progress Report: Writing, interviewing, and 45% funded after 50 of 90 days

I've been sick this week, which has unfortunately slowed our momentum, but we're still looking good at 45% after 50 days (into a 90-day campaign). Hopefully we can get this moving again next week and push past the halfway-funded mark.

I wanted to take a moment to update you all on my progress with the actual book as well. I have three chapters that are finished and basically ready to go. I recently started writing the chapter on John Calhoun of Glider and Pararena fame. I also have partial drafts for chapters on Freeverse (Burning Monkey Solitaire, SimStapler, and lots of great late-90s/early-2000s shareware), flight sims (primarily GraphSim's Hornet series and Parsoft's games), and network gaming (lots to cover here, including Bolo, MazeWars+, Clan Lord, and how things like AppleTalk and GameRanger made it easy for anyone to play online or within a local network (such as in an office or dorm)). I'm shifting my focus more to writing rather than research and interviews now, so I'll have more to share soon.

That's not say I'm not still talking to more people. Just in the past couple of weeks I interviewed or made first contact with Alan Kay (one of the pioneers of personal computing and all the ideas that the original Mac stood for), Christopher Gross (best known for Shufflepuck Cafe), Roy Harvey (Grid Wars), Ben Haller (Solarian II), Ken Winograd (Brickles, Hangman), David Smith (The Colony, and years later provided tech and funding for Tom Clancy's Rainbow Six), Matt Soell (Bungie), Phil Sulak (co-founded Westlake, worked at MacSoft, Parsoft, Looking Glass), and a few other people whose names are slipping my mind right now — plus several others who I've either attempted to reach for the first time or recently followed up with.

I haven't re-tallied the number, but I'd say we're probably pushing 70 confirmed/completed interviews now and may well be on track for 80-90.

And finally, on the research side I'm continuing to uncover cool/weird/interesting/surprising things — though at a slower rate than before. Last week I found out that the Mac had disk magazines. These were magazines published on a floppy disk. They contained various exclusive programs as well as editorial content. They were more prominent on PC and Commodore 64, but apparently the Mac had a few. Softdisk, which is probably best known for publishing id Software's early PC games, had one called Diskworld. I've made contact with the former editor to find out more. I also found this cool press release for Ben Spees/Ambrosia Software's Harry the Handsome Executive. 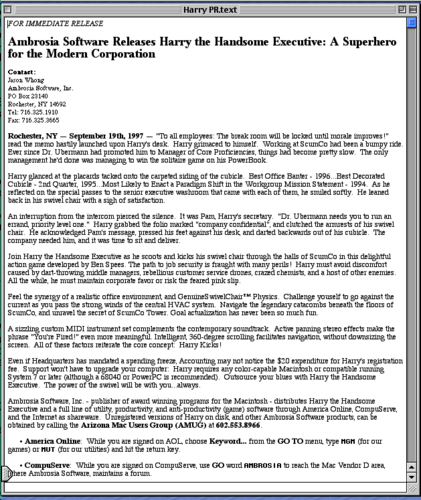 Probably not so useful (all my floppy disks from disk mags are long gone) however, I have 80+ CDs from magazines I used to read on a regular basis (Mac Format, Mac Addict and the like). Happy to donate them to the cause if you think they'd be useful...

Similarly the German Mac Magazin came with cover CDs full of shareware, demos etc in the late 90s. I might still have a spindle full of them sitting around...

Many IMG disk images are archived at archive.org.
https://archive.org/search.php?query=%22inside%20mac%20games%22&and[]=subject%3A%22Inside+Mac+Games%22
The earliest one I see is Jan/Feb 1995; Wikipedia suggests that this is ~2 years after the magazine started.

Might be worth looking among those disk images for the interviews, if nothing else.

Thanks guys. I'm well covered when it comes to floppies/CDs that came attached to the covers of print mags (I also have scans of a large number of these mags, including Macworld pre-1995, MacAddict, Macwelt, and some MacUser issues), and I'm pretty sure I have the entire run of Inside Mac Games zines (yes, they have a lot of great interviews and other tidbits in them). I'll share some screenshots of early IMG issues in a future update.

If anyone happens to have copies/archives of Diskworld or other magazines that came on a disk, though, let me know. I'd love to see them.