First of all I want to say a massive thank you to all the new supporters who have backed love lay down beside me and we wept. It can be easy to have doubts in a crowdfunding campaign, especially once I've emailed/messaged/generally harrassed every person in my acquaintance and I'm not sure who to approach next and whether it is acceptable to accost random strangers on the street (I'm pretty sure I did that when I was crowdfunding Backstreets but it wasn't one of my more  successful approaches). But then in the midst of my doubts, I have a run of pledges from people I know and people I don't and it feels wonderful and very special. Over 60% in a little over 2 months is fantastic progress. I'm impatient to get it funded because I want the book to be in the hands of all the generous supporters who have already backed it (ie you!). But we will get there, I am absolutely confident of that. (On that note, I was going to say if you know anyone who might be interested in it... but actually I need to thank the folk who are already doing a brilliant job at spreading the word for me. The book is starting to reach networks outside of my own because people are sharing the link on social media and telling their friends. It makes an enormous difference.)

What's new with the campaign? Well, I'm just back home after a fantastic trip to Scotland to take part in Aberdeen University's WayWORD festival. It was an amazing and really uplifting experience. I did two events, a writing workshop on how to write about mental health and an author event about my memoir. In writing workshops, it always astonishes me what people can produce writing under pressure to certain prompts, and this one was no exception with high quality, thoughtful work being shared and some great discussions. Of course, we ran over time! Thanks to all those who took part and made it a success.

The second event was titled Tattered Memory and I shared it with Timothy Baker whose memoir, Reading My Mother Back, has recently been published by Goldsmiths Press. We both read short passages from our books to a full house. It was the first time that I've read any of mine to an audience in real life. Because I was a bit nervous, I decided to read a section from the early part of the book that doesn't deal with any of the tricky stuff about mental health but instead talks about love. Weirdly, though, as I started to read I felt a huge wave of emotion and for a moment thought I might not be able to hold it together. I managed though. Not sure if anyone else noticed or not. 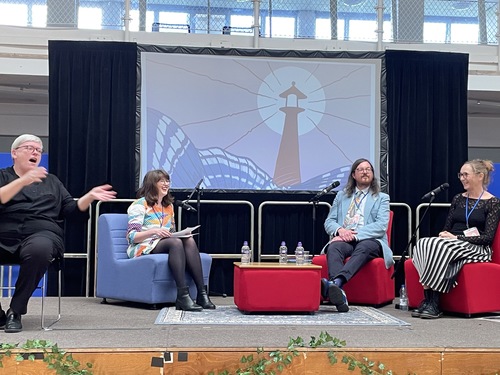 Both our memoirs deal with recreating the past from unreliable memories, and the complementary and overlapping themes — about what constitutes truth, whether other people who were there have different recollections etc — which meant there was loads for Tim and I to talk about. The event was chaired by Dr Sarah Sharp and BSL signed by Lesely Crerar. It was brilliant. Considering some of the subject matter, there were more laughs than you might expect. I was buzzing at the end of it. I hope the audience enjoyed the event as much as I did.

Crowdfunding has its upsides!

I'd have loved to be in the audience, they sound like fascinating talks :-)

Thanks, Fiona. If I do any more events I’ll make sure I let everyone here know.