Love, Death & Trousers: Fifty Stories from a Nearby Life

By Laura Francis and Alexander Masters

It’s quite possible that these non-fiction stories, taken word for word from a collection of 148 anonymous diaries found in a skip in 2001, have nothing at all to do with the diarist’s life.

That’s not some sparkling post-modern observation: it’s a genuine risk.

All the sentences, events, perceptions, shocks, humour and fineness of writing belong to the diarist, but the stories are mine.   The themes have been spotted across diary sections containing tens of thousands of words, and edited down into narratives of at most four or five hundred.   Nothing about these stories is made up, except their existence.

The discovery of these diaries and the four years I spent hunting down their author are the subject of my book, A Life Discarded.

Laura Francis could be an excellent diarist, but frequently wasn’t.  Why should she be?  She wasn’t writing for an audience.  She had no duty to entertain.   Her writing is repetitive, self-obsessed, confused and 2mm high.  A typical 200-page notebook from the 1990s contained over 100,000 words and covered just six weeks of her life in which nothing happened.   Yet the diaries are full of good stories.   Her writing also has the one quality that professional writers, fiction or non-fiction, find the most difficult to capture: vitality.   Even when the diaries are agonisingly tedious, you want to go on reading them because they are true.  No novelist has clattered into this woman’s life to impose a narrative ‘arc’ on her images of incarceration and waste.   There’s none of the story-teller’s fraudulent scene ‘setting’, character ‘development’, point of conflict, concluding resolution.  You are peering in on a real woman who thinks she is alone – a woman in the final stages of tedium.  She is writing about being an ordinary human: the arbitrariness, the impotence, the fog.  Vitality – aliveness – comes to her just because she has picked up her pen.   Her drama is that she is not fiction. 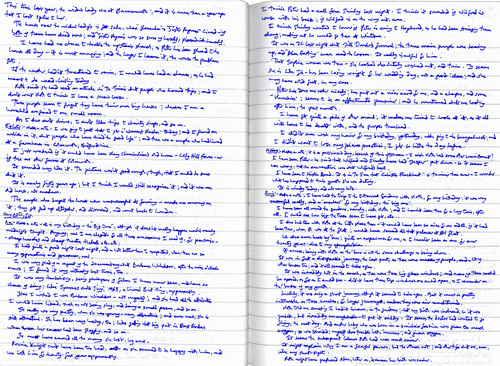 Laura’s diaries work best at the extreme dimensions of writing: page by page, they lack structure, pacing, plot, character development and, most of the time, excitement.  But at the large scale (book by book) and the small (sentence by sentence) they are replete with drama, human insight and lurking narratives.   I have recently started posting a daily tweet from her journals – an excerpt taken from that same day in, say, 1961 or 1999 or 1974.   Tweets turn out to be an excellent length for Laura’s ink-pen verbosity.   Her comedy and vigour get lost in the drone of the page.

The stories in Love, Death & Trousers are attempts to bring stories to life by eliminating words.  The glorious phrasing and brilliant observations of an inconsequential life are provided by Laura: that’s the non-fiction.  The fiction, chipped out or moulded up by me out of the five million words rescued from the skip is in the structure and form.  A different editor would have ended up with something entirely different.

These stories, below, first appeared in The Paris Review.  ‘E’ is Laura’s guide and muse, a piano teacher, fifty years older than Laura.  ‘Elf’ is Dame Harriet Chick, DBE, the eminent microbiologist, for whom Laura worked during the second half of the 1970s.

I am under much more stress than the Queen.

I am under much more stress than the Queen.  The Queen not burdened with an Elf. (1977)

May 19th, 1974:  And it does seem disloyal to E, as these feeling rightly belong to her.  But due to E running me down so often, belittling me and making me feel a fool, my feelings for her have cooled rather.

Did the watering, and I put my arm in Elf’s for the walk back through the garden.  My love for her made me feel thrilled and excited.  My mind not really on the plants, and I forgot to turn the tap of the hose off this evening … she herself reminded me.

May 19th:  Dreamt about getting into a swimming bath with Elf, and woke feeling very sexually aroused.

May 19th:  Felt v. thrilled to be re-united with her; aware of a disturbing depth and strength of love for her.  Do love her so very much.

May 20th:  Wish I could love her less. I feel quite ashamed of myself.  Of course worry about my health and ability to cope, in view of being in charge of something so precious.  My little love, my little jewel, my little flower.   She is 99.

May 28th:  Things have gone from bad to worse – quarrelled with E on the phone.  E really noticing now the lessening of my love, and beginning to complain of its manifestations.  E obviously wondering why it is, and I even don’t know myself, only her beastly criticisms have a certain amount to do with it.  One can hardly be fond of someone who makes one feel like a crushed worm.

June 29th: Feel in duty bound to stay until Elf has her hundredth birthday.

Jan 6th, 1976:  The little darling old woman’s 101st birthday – to my surprised, hardly anyone noticed it, after last year’s great palaver of telegrams and flowers.

June 7th:  Depressing for anybody who has anything to do with her.  Taking her to the lavatory, her incontinence, all the washing.  This strain has been going on for months.    Yet E said, Elf may not wish to die!

June 27th:  Elf just got us up, with some complaint about constipation.

c. 3am: Elf clutching the bedclothes, which I gather is a sign of approaching death.

c. 3am: Her eyes staring & frightened.

The evening view over the field from my room is very beautiful, but extraordinarily Elfless, 1977

July 9th: My emotional pain is as constant and sharp as a knife. It seemed she didn’t die in her sleep. Had asked for breakfast, then suddenly died.

July 9th: A subdued lunch. I sought consolation in sugar, and had two help- ings of the syrup steam pudding.

July 11th: My pain still worse this morning. A most beautiful picture of my lovely little Elf in the “Times”. Rushed out, and bought four “Times”. I would not let the newspaper girl touch the “Times”.

July 13th: Almost felt happy excitement, as I went up to put on my dress, because I was “going to see Elf ”. The black car, which I had dreaded yesterday, also gave me a kind of keen, childish excitement at the occasion. Enjoyed the slow stately drive out into the country.

July 13th: After a short wait in our car in the drive of the crematorium, the hearse appeared. I had surprisingly a rather non-reaction to the coffin. It did not look touchingly small, like Aunt Maude’s did; just Elf ’s size, & little Elf lay inside the yellow wood, with a pile of flowers on top. I wanted to touch it, as if touching Elf, but did not like to. Did not even know which was her feet end.

July 16th: I recall the subterranean roar of the furnace at the crematorium, and on my way home, pictured for the first time the flames beginning to lick Elf;andElfasalwayspatient,accepting,notresisting.Wouldhavelaincom- pletely still, as the furnace blackened and devoured her. Had always pictured here “ashes” as white, but perhaps after all, they will be black, with the odd shard of bone or tooth.

( July 10th: The casket containing her ashes will be brought back and stored in her bedroom, next door to mine! It will contain the most innocent & basic of elements only—mostly chalk, iron, potassium.

July 10th: Elf had borrowed these elements, & now they will be returned. Would even be good fertiliser to thriving plants.

July 11th: Of course, Elf ’s minerals may not be her original ones, as the body renews its cells all the time.)

July 12th: Optician has just rung up, to inform me cheerfully that Elf ’s glasses are ready, and must be paid for.

A first-come, first-served copy of the first edition hardback at a special price, plus your name printed in the list of supporters at the back of the book 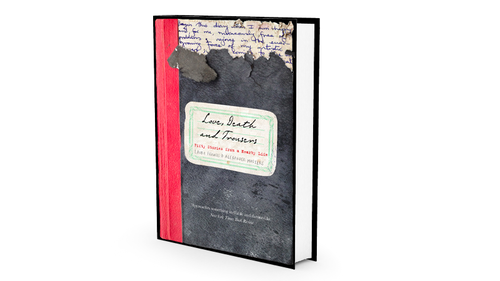 A signed copy of the book and the chance to help Alexander transcribe a section of Laura’s diary (available online via Transkribus – information pack to follow). 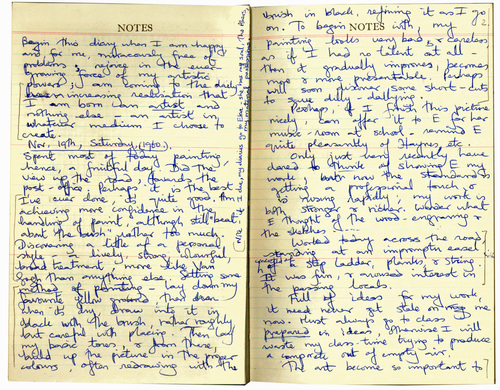