Foreigners, drifters, and eccentrics reach out to strangers in their desire to be witnessed, to be connected, and to find safety in a sea of anonymity

You know that thrilling feeling when you see something unexpected - usually visual - and for a tenth of a second you're speechless, breathless, frozen? Your mind hones in on what is in front of you and blocks out all other external input - it's like when you have tunnel vision. Your interest is fully piqued and your concentration is 100% there.

Slowly, you sit back, relax, take a deep breath and absorb the surprising information in order to make logical sense of it. What is that? What does it mean? How do I feel about it?

Is that my name there? My title?

How clever he is to have included all of those images and elements we discussed.

How playful to have used bananas!

The next step, after recovering from the adrenaline rush was to choose one of three. The first one hit me in the funny bone - it's so great and eye-catching BUT my stories would have to be a lot more comedic to carry the image he had in mind. In fact, I'd consider writing new stories just to have that cover....maybe later?

The 2nd is beautiful, charming, poetic and touches on something I posted a while back on FB: a glass jar catching fireflies. There is a starry sky so that the fireflies glow and the book title is written in the stars like constellations. That one could work.

Yet, it's the last cover which amazes me. He took one word I mentioned: kaleidescope and used a list of objects from each story to creat this amazing tapestry. I see the animals I mentioned, I see the playful elements of France: a croissant, the Eiffel Tower; there's a London bus and the tube sign. But also he captures the feeling of vulnerability in the center. I won't give it all away and I'm not allowed to share it yet but whichever one I choose for Love Bites will be a surprise. I hope it's as delightful a surprise to you, my supporters, and readers, as it was to me. 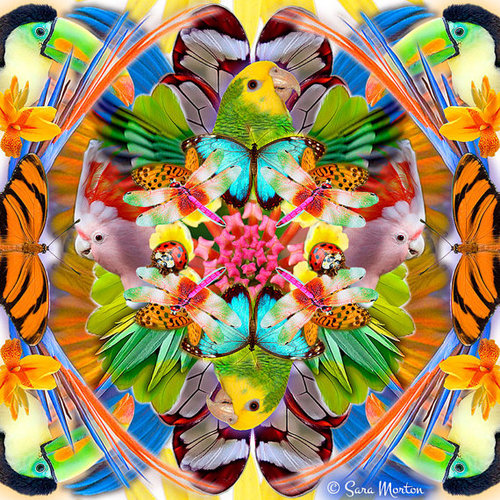