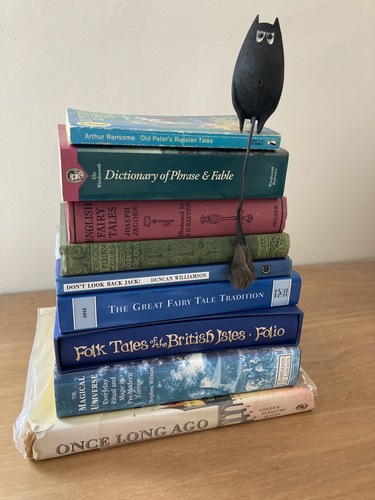 Exciting news to share today!  The final rewrite of Lost & Found has been completed and the manuscript has been duly dispatched to the Editorial team at Unbound.  We're one step closer to landing on your bookshelves.  Thank you so much for the ongoing support, it makes a huge difference to know you're out there cheering us on.

In addition to the fine-tuning of the tales, I've also been working on a set of Footnotes - explaining the origin of the story and sharing my research and development process.  It's been such pleasure to return to my notebooks and revisit the experience of piecing together my own personal retellings.  I've also been going back to the sources, here's a selection from my own Folk Lore shelf, guarded by the Dark Sow who sits on my desk and watches as I write...

And here's a glimpse of what to expect from the Footnotes too:  the background to Johnnie He Not, the full text of which can be found in the update on 29th May 2020.  Update on 2nd December 2020  contains a video link to an event I did with Dr. Tim Campbell-Green which expands on the idea of the echo of Folk Tale motifs and archaeological finds, referenced below.

I have always been fascinated by the motif of the Changeling Child.  It repeats across cultures and across time.  I do wonder whether it might be a Folk Lore retelling of the common human experience of post-natal depression.  I explored this theory within the Folk Tale backbone of my second novel The Ingenious Edgar Jones – but that is, quite literally, another story.

The first written version of the Changeling story I read was Brewery of Eggshells in Jacobs Celtic Fairy Tales – which varies significantly from this retelling.  The changeling children are twins and the mother is the agent of reveal: she uses the trick of the eggshell to discover the true identities. She then throws the ‘goblin children’ into a lake and her human twins are returned to her.  The eggshell  is the most common method of discovery I have found in my research.  However, alongside the whisky and the bagpipes there are creative uses of pokers and griddle pans and many more besides. There is also a common theme: the Changeling is most regularly disposed of up the chimney.

At The Blackden Trust, Dr. Tim Campbell-Green and I have discussed the crossover between these variations and the contents of what are thought to be protective ‘caches’ or ‘spiritual middens.’  These are everyday objects, seemingly deliberately hidden at domestic thresholds: doorways, chimneys, windows.  Often these are made of iron: pins, nails, sometimes keys.  Alongside them, individual shoes – always worn, always repaired. It’s a fascinating echo of story and archaeological object – which deserves more detailed discussion than a footnote.

Finally, the character who defeats the Changeling is sometimes the Mother, sometimes a Soldier, occasionally a Priest (who makes a sign of the cross from two pokers) but overwhelmingly, it’s the Tailor.  Perhaps because of the delicate skills required in the brewing of the eggshells.   Perhaps because the ability to transform 2 dimensional cloth into 3 dimensional garments is innately magical.

Tibbie, Johnnie and Wullie are names taken directly from The Changeling II, Briggs. Old Wullie’s fate is also from Briggs: The Tailor and the Fairy – but this is not an overt Changeling narrative. The Tailor tries to catch a fairy in a bottle, but is lead away by a beautiful girl in a field who is carrying a blue light. He follows her and is never seen again.  It made sense to me that this could be the other side of the Changeling story – the Other Folk can be vengeful, especially against human transgression.  So, following the Folk Lore logic I stitched the two tales together into Johnnie He Not. 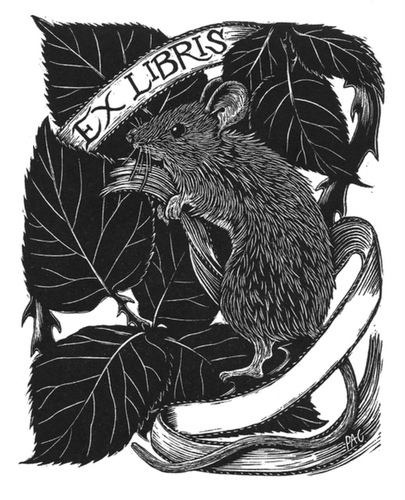 A signed first edition hardback and A4 art print of one of the book's beautiful wood engravings. 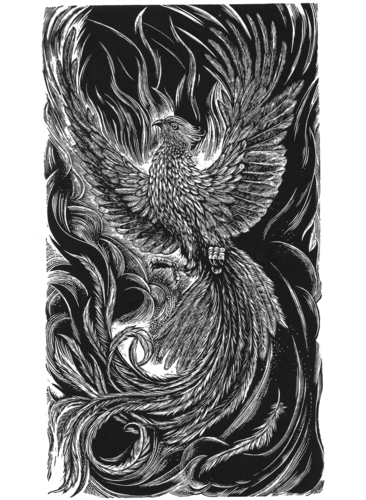