Once there was a farmer’s wife and her name was Tibbie. She had her own particular way of looking at the world, paying more attention to what was lacking in her life than to the counting of her blessings. Her husband was a man of work rather than words and he had little time for her complaints.

Whilst the farmer tended his land and his livestock, Tibbie sat alone at the kitchen hearth. She whispered her longings to the flickering flames, of how she would give all that she had in return for the one thing she had not – a child. As the coals shifted against the grate and sighed in sympathy, someone or something heard her.

Springtime came. The forest, fields and farmstead were all burgeoning and blossoming with new life and so was Tibbie. She laughed at the lambing, cried at the calving and by the time harvest rolled round her belly was drum-tight.

Her boy was born with eyes the colour of chestnuts, skin as soft as butter and his hair was coppice-copper bright. He was well-loved by both his mother and his father and they named him Johnnie.

Johnnie was simple to suckle and swift to sleep. Nevertheless, Tibbie would be awake half the night, cooing over the cradle, marvelling at the miracle of him.

One morning, her husband already out with the dawn and at the plough, Tibbie came to the barn to find the water trough upended and the calves leaping across it for their sport. The cobbles were slick and slippery. Johnnie was hugging at her hip, unbalancing her at every step.

Tibbie went to the kitchen, drew up the fireguard and set Johnnie down in the cradle. She kissed him and tucked him in tight. “You’ll not even have breath for blinking before I’m back,” she said.

Tibbie ran a swift rope as she hauled the pails from the well and set the yoke about her neck. She was at the troughs in an instant, then round the midden and the peat stack and heading for the cottage.

She was crossing the yard when she heard it. A savage screeching like the sticking of the sow at slaughter. Except that this was harder, harsher and human.

Tibbie all but ripped the kitchen door from the hinges as she went flying through it. She grabbed Johnnie from the cradle. His face was plum-puce, his smock sodden with salt tears. He beat his fists against her breast and there was nothing she could do or say to bring him comfort.

From that day onwards, it always went the same. Johnnie would be all sweetness and smiles at dawn. But as soon as the farmer set out for work, then Johnnie would be racketing and rioting, and not cease until dusk fell and his father returned.

Tibbie’s skin bloomed black and blue with all his punching and pinching. Her milk soured and then ceased. But she knew, well enough, this was fair dues for desertion. So she bore her shame in secret and spoke of it to no-one.

There are secrets that need to be spoken and then there are those that travel swiftly on a strong wind.

Beyond the farmyard, there was a road and in a cottage on the other side of that road lived a tailor. His name was Old Wullie. He was a quiet and careful man, with wits as nimble as his fingers. He knew that when folk came to him with a coat slashed at chest and pocket or a dress torn at bodice and hem it’s fair costing not questions they’re after.

Old Wullie stoppered up his ears with cotton, stuffed salvages of velvet into the lintels of the window, but the howling leaked through regardless. It frayed his nerves until every seam he set ran crooked.

He could feel his fortune slipping through his fingers. One morning he could bear it no longer. So he put his pack upon his back, grabbed a fistful of buttons and ribbons and went knocking at Tibbie’s kitchen door.

When Tibbie saw Old Wullie offering up his trinkets, she thought how long it had been since there had been any kind of brightness or beauty in her life. She swallowed back her shame and welcomed him in.

“Don’t mind our wee Johnnie,” she said, with a voice as brittle as her smile. “These daft turns of his soon blow over.” Old Wullie looked the bawling babe that was twisting against her embrace. “There’s many kinds of words for the likes of him,” he said “But Johnnie he not.”

Tibbie recalled the tales she had heard about her good neighbour, the wise tailor whose trust was as strong and tight as his stitches. “Then what name would you give him?” she asked in a whisper. “Less said, soonest mended,” said Old Wullie as he drew a chair up close to the fire. “But I’ll tell you true, there are three roads you can take to the reckoning of this matter. I’m in mind to start with the one most trodden.”

Old Wullie undid his pack and took out a bunch of hops, a bunch of barley, a fresh egg and a silver needle. Then he turned and looked at Tibbie directly. “You get yourself the other side of that strong door girl, lock it tight. And whatever you see or hear, don’t move an inch until the supper’s swallowed.”

Tibbie did as she was told. Then she pressed her cheek to the rough wood and set her eye to the keyhole.

She watched as Old Wullie pierced the eggshell with the needle and set his mouth to it. He sucked until his cheeks were full then spat into the hearth. Then he cracked the blown egg clean in two. He took water from the jug and poured it into the half that had no hole. He crushed the hops and barley between finger and thumb, and placed them in the water. He set the frail flaggon in the ashes of the fire and waited.

There crawling along the lip of the cradle came a withered hand. Peeking out behind it, small squinting eyes as black as coal.

Tibbie crammed her apron into her mouth to stopper up her screaming and she watched on.

Johnnie He Not pulled himself up to full standing, folded boney arms about his buckled belly and he grinned. His smile stretched across his leathery face from the tip of one ear to the other.

When he spoke it was with a voice that tore the air.

“I am old, older than old,” he cried. “But never in my live long life have I ever seen a tailor mash beer in an eggshell.”

Johnnie He Not leapt from the cradle, grabbed the egg from the hearth and swallowed it whole.

Then he let out a great whoop and went diving back down into his blankets.

When Tibbie could bring herself to cross the threshold and look into that cradle, there was the semblance of her son, squalling in his sleep.

Then he shouldered his pack onto his back and bade her good night.

When the farmer returned, Tibbie took him out to the coal shed and wept as she told how she had favoured the care of the cattle over the care of their child and all that had come after. She told of the wisdom of their good neighbour and how if they stood together on this matter they might find a way to fix it.

As Tibbie spoke she felt the great gaping silence between herself and her husband grow darker and wider.

When there was no more to be told, the farmer turned away and set out into the dark night without as much as a backwards glance.

The thing in the cradle howled the whole night through. Although it bore the face and form of her Johnnie, Tibbie could not bring herself to touch it.

Dawn was breaking when Old Wullie came knocking for the second time.

“You get this side and I’ll get that,” said the tailor swinging the door shut between them. “And whatever you see or hear, don’t move an inch until the dram is drunk.”

Tibbie spied silently as Old Wullie drew the chair close to the fire and took his pack from his back. She felt a shifting in the air beside her. She turned, there was her husband. She put her finger to his lips and guided his gaze to the crack at the hinge of the strong door.

The moment Old Wullie had the whiskey out, Johnnie He Not came rearing up, grabbing at the bottle. His twisted mouth gaped open wide and he swallowed it all down in one gulp.

Then he let out a great belch and fell back down onto the blankets.

The farmer was across the threshold in an instant, with Tibbie chasing at his heels.

When they made it to that cradle, there was their son, cooing and chirruping through his dreams.

“There’s only one road left now,” said Old Wullie. “And it is not a kind one.” Out by the peat stack, the farmer and the tailor talked late into the night about how the worth of a child might be weighed up and measured out in fleeces and skins… 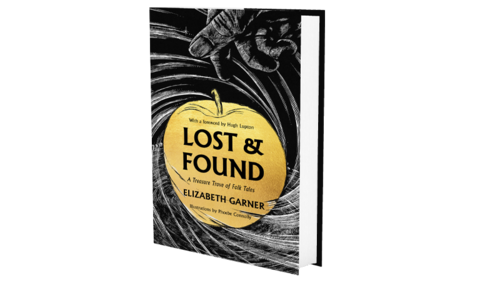