Since "Listen With Father" launched a week ago, I've been reflecting on what a performance listening to music used to be.

To play a record you had to ease it carefully from the sleeve without touching the grooves and then place it gently on the turntable. Then you'd lift the arm, and lower it delicately on the vinyl. One false move and you'd scratch the record horribly.

When the first side of the record finished, you had to get up and turn it over. And if you were classical music listeners in the 1950s as my parents were you had to do this several times just to hear a single piece. My Mum remembers a recording of Mozart’s Symphony No. 36 – aka the “Linz” Symphony - conducted by Bruno Walter, which was spread over six discs. After they got married in 1956, my Mum and Dad saved up for - wonder of wonders - an auto-changing record player.

Sometime in the early 1960s, Dad bought a then state-of-the art reel to reel tape recorder, very much like this one. 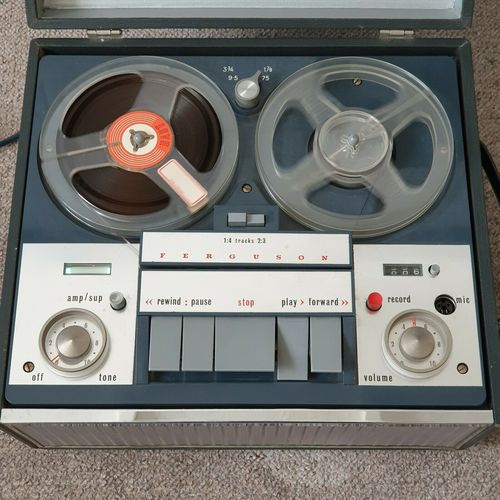 This allowed him to record music from the radio so he could listen again to his favourite pieces (no on-demand in those days). But loading the reels, and winding the tape from the full one onto the empty one and setting it spinning was still quite a performance.

In the opening pages of "Listen With Father" I write of my very first musical memory - of hearing Mozart's Piano Concerto No.22 in E Flat playing on that same reel to reel tape recorder. I have no idea which orchestra or sololist was playing. All I know is that I loved watching the reels go round. And I loved the music too.