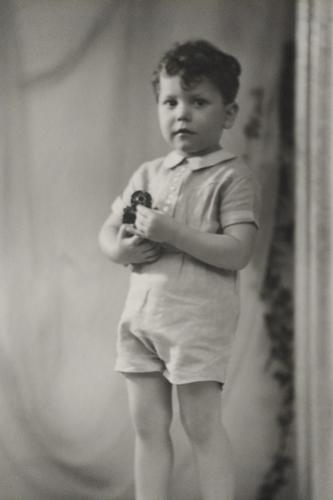 Today is the 8th anniversary of my father's death from prostate cancer. It feels both a long time ago, and also all too recent and raw. Bereavement scrambles time, I've noticed.

In my #ListenWithCaroline post today, I'm recommending Robert Schumann's "Kinderszenen" or Scenes from Childhood in memory of my Dad who you can see below as a child himself (that's a toy engine, not a gun he's holding!)

Composed in 1838, these thirteen short vignettes for solo piano capture elements of childhood, from games such as “The Knight of the Hobby Horse” and “Blind Man’s Buff”; to locations both real and imagined including “By the Fireside” and “Of Foreign Lands and Peoples”; to moods and actions characteristic of young children including “Child Falling Asleep”. They are gorgeous and transporting and Dad loved them.

His favourite recording was by Clifford Curzon, but I’d also recommend listening to the great Vladimir Horowitz whose playing of these simple pieces is both exquisite and profound.

The whole set lasts only around 20 minutes, but if time is short, just listen to the piece called”Träumerei”, which in English translates as Reverie. This deceptively simple piece – so simple that even I can play it on the piano - is also fiendishly difficult to play in a way that expresses the complexity of emotions contained within it: sadness, longing, wistfulness, remembrance.

“Träumerei” was my Dad’s favourite of all the Kinderszenen. Here he is as a child himself. I invite you to listen to it in memory of someone you love and have lost.

ThankYou. ThankYou for sharing such a Precious Memory. God Be With You.
Respectfully Yours~Kathleen Lechner