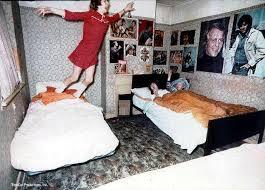 The three-part series is based on Guy Lyon Playfair’s book This House is Haunted. Whether you believe in haunted houses or poltergeist activity will colour your viewing this as a nostalgic piece of hokum, or proof that there’s something out there we can’t quite understand. I must warn you it involves single mothers and council house tenants—we had them even then, August 1977— when everybody was forced to dress in wide flares and scratchy curtain material and it was mandatory for young girl to have posters of David Soul on their wall (boys had pictures of their favourite football team).

I know all this because I was there, not in Enfield, but Clydebank. Every council estate had its own ghostly activity. Stories of houses nobody wanted to live in. Now they’d be snapped up, especially in London with house prices rising so fast (seven times the national average) it’s scary and there wouldn’t be enough room for ghosts, with would-be buy-to-let buyers elbowing them aside.

If we go back a bit further William Peter Blatty’s book and the film The Exorcist was also based on a similiar case. Then we had, in my opinion, a scary book and movie, The Omen. Like the Scottish play, the cast of that film were supposed to have met particularly gruesome deaths. Damien is my second name, so I can speak with authority here, and if you look back at still photos of young Damien in The Omen you will see glaring out at you pictures of a boyish David Cameron. It’s probably just coincidental (if you belief in coincidence) that Damien the devil child spent most of his young life in England and attended public school.

Janet Hodgson (Eleanor Worthington Cox) is cursed with the curse and the curse of having to use the same bathwater as her elder sister Margaret (Fern Deacon) so when her hands come out all gooey with menstrual blood the viewer knows darker forces are in hand, but she’s only half as cursed as her young brother Billy (Elliot Kerlay), because he’s got to use the same water when the two older girls are finished. They’re in luck because mum (Rose Cavelario) doesn’t need a bath and their other brother is at a nice approved school run by nice people that would never do anything bad to their charges.

Cue Maurice Grosse (Timothy Spall) that everyman sent by the Society of Psychical Research to investigate. He knows there’s trouble at hand when a painted teapot, that emblem of British togetherness, ups its spout and smashes on the floor. Soon he’s lost his marbles as they ping and fly at him from every direction. We get a bit of backstory. His wife Betty (Juliet Stevenson) looks as if she’s having an affair with a black man. Trouble is he’s meant to be talking to their daughter killed in motorcycle accident. They are a family possessed of repressed stiff-upper lippedness and by the need to know.

Step into the Hodgson’s chaotic family life of pubescent girls, adolescent sexuality, school bullying and things that go bump in the night, Guy Lyon Playfair (Matthew Macfadden) with the kind of name that looks how he sounds. He’s the expert sent by the Society for Psychical Research to sort out the rookie Maurice Grosse, who keeps producing headlines in tabloids and the wrong kind of results.

They decide to interview the poltergeist and invite a medium of many faces and voices, a bit like Mary Poppins on speed. The medium tells Grosse the house is cursed. She knows about the immerser and how difficult it is to heat bathwater. Worse than that old Joe died in that chair. Grosse goes and visits old Joe’s son. He hints at all kinds of dirty deeds, the dirty old bastard went blind doing, which is plainly much worse than cor blimey and god only knows. Grosse goes back to asking Joe why he’s so gross.

It’ll all end in tears. You guessed it. Pan camera to The Enfield teenagers, two-years older, and decades wiser, standing looking out of their council house window. Smoking. Half way to being teenage mothers and demanding a council house of their own to haunt. Little do they know David Cameron is waiting for them on the other side. That bastard will haunt us for decades. Is there an exorcist in the house?