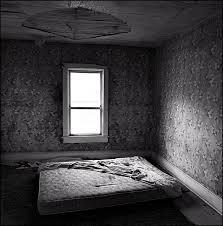 You didn’t need to be a fortune teller to work out what Granda was thinking. Eyes windows of the soul, but eyebrows garbed like two grey squirrel tails swiftly climbing up his bald pate told you clearly that he was mad at the world, or someone in the world, which usually meant the grandson that never visited, never did anything for him and was as useless and good for nothing as his dad – and that was saying something.

‘I don’t suppose you’ll be wanting a cup of tea then?’ I asked.

He huffed and puffed and tried to get up from his chair, before forgetting what he was mad at and watching the telly. The ashtray scorched, burned brown and mostly clean was on the table pushed snug against the side of his chair, alongside the blister pack of medication, and a green glazed mug of tannic acid that was once tea. Reaching across I picked up the mug and, with a jerky motion scooped the ashtray out from under the shelf of his eyebrows, before he could turn his head. Hid the notion of smoking away from him in the sticky gap between carpet and the chair’s casters. I found myself watching the movie for a bit with him.

In the film a fortune teller is holding the palm of a woman’s hand while her slick-haired paramour looks anxiously over her shoulder. Granda liked black-and-white movies because they were better and because everything on the telly was shite now. There’s a jump shot. Screechy violins so we knew the fortune teller was up to no good. The two nascent lovers walk arm in arm towards the rail of the boardwalk and look down to the tumultuous sea. Granda turned his head to give me – and those long dead actors and actresses – some advice.

‘You can’t trust fortune-tellers because they always tell the truth.’

He used the remote to turn the truth up a notch. He thought Mrs McGrath next door was listening to every word uttered. The walls in the sheltered housing complex were needle thin, but it was not just that. Granda laid the evidence before me like Colombo. For one thing, Mrs McGrath being a woman. And another thing she tried to palm him off with a packet of Hobnobs that were too hard for her teeth. She was after his money of course, although he insisted he’d nothing for nobody. But she was a woman and, whisper it, wore all kind of clothes. Coated her face with that enamel stuff to make herself look younger, and women like that, although you couldn’t trust them, they like to know everything and everybody’s business. And women know everything, whether we liked it or not.

I sloped off to the kitchen and put the kettle on. Filthy with unwashed plates and cups. Granda didn’t trust home helps either. Always rooting about your business – and yes, after your money. Run the hot water tap. Kettle boils, but I ignored it. Poked about and tie up the plastic carrier bag on the door overflowing with all kinds of crap. Pull open the top drawer where he kept all the other plastic bags, too precious to fling out, and he loved nothing more than a bargain, especially something he hadn’t need, but might have come in handy. Made a raid on the fridge. Started bagging the inedible stuff on the top shelves and worked my way down. Six bags. Then eight. Sludged the carton of milk. Nine bags. Then ten. Eyed the pots cemented to rings on the cooker, filled with half-cooked mould. Soup or mince? I wasn’t sure. Put the lid on a pot and slide it like a spatula into a plastic bag and tie it over. Took a deep breath as I reconsidered. Untie it. Dabs of rain sliding down the kitchen window, peer through to the fence and grass and garden are outside. Hold my nose as I bang the contents off the work surface and inside the bag and quickly tie it shut. The sinks full of hot water, but washing up liquid would be just the kind of luxury women with nothing better to do with their time than gossip would expect. Made you lazy.

Women’s work. I wasn’t lazy. Gathered bags around me like a dress of errant children, pick them up, and made a dash for the door and the communal bin area outside. Glad to get a bit of a breather and fresh air. A seagull swooped from the roof in a lazy air curve, with a guttering cry, mooching for pickings.

Better not think of opening the bathroom door. A Somme trench coated in shite. You needed to watch your feet. The stench of a barb-wire wraith wrapping itself round you, clinging, following you through the house and all the way home. How Granda kept moderately clean was a mystery between him and the Immaculate Virgin Mary.

The living room was a shrine of breeding mouldering Marys, looking wistfully away to God knows what. Dotting every dusty work surface. Growing confident enough to sit two abreast, without breasts, on the telly.

Granda gave up on medicine. He believed in garlic, mustard poultices and scarves around his neck. If his legs were working, for sure he would be ok. Doctors were just in it for the money and the easy hours. They started about ten o’clock and finished at two. And they had a two hour lunch break in between. They were all millionaires now. Didn’t know their arse from their elbow. Not like the old days.

MGM Music boomed from the telly and the lion roared. I was confused. Didn’t know if the film was finishing or a new one starting. Nothing too bad ever happened in black-and-white. Took him through a cuppa. Granda slouched sideways across the chair. Sleep of the dead.