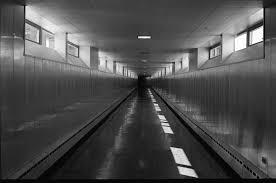 The security guard with a pencil moustache, slides open the window of the lodge at the hospital gates and addresses me as ‘sir’.

I’m given directions and my thoughts take flight like frogs springing from water lilies leaving behind a grey silence. The bored bureaucratic tone, and the way he ganders at me from beneath his peaked cap, shows what he really thinks. I’m to go right along, past the old hospital buildings, turn left and that was you there. You couldn't miss it.

But I do. Gargoyles clinging to the masonry of ward roofs guttering rainwater reintroduce themselves, and the blackened stone of Scottish turret and towers in permanent shadow push me off the map.

Scurrying along in a new and different direction, praying for signs, I spot a white coat in the distance. A doctor’s guise, with the power of life and death. He takes a sharp right into one of the modern buildings. I dart in his direction and follow his lead.

The sun peeks out of clouds and captures white render on outside walls hanging tight as a flag, clip on plastic pipes and well-tended front lawns. Somehow the single-storey blocks are familiar in their unfamiliarity as ‘the huts’.

I’m searching for Ailsa ward, but there are no signposts and nobody to lead the way. I look what I am - lost. Dashing up the creamy-white concrete steps of the nearest building, it’s cold outside, but not inside.  Sweat soaps my armpits, making me itch, and even more self-conscious I’m smelly. Struggling out of my duffle coat, I’m not sure what to do with it.

If I’d still been at school I’d have simply tied the arms around my waist, but I settle for putting it demurely over my arm like a beggar’s sack.  Clean fingernails Mum had stressed. Clean jumper and a white shirt and black tie and a pair of black trouser and black shoes. The typed letter from the hospital, with the mimeographed signature of the governor of Glendevon Hospital , Rt.Hon. John Lennox, had not told me to wear any of these things, but Mum kitted me out as if I’m attending a distant relative’s funeral.

The euphoria about getting a job dies an unnatural death. A wall clock marks the division of wards on the right and left-hand side.  The minute-hand jams on school time, hitting and bouncing back to a continuous five-past nine. I contemplate playing truant, sneaking away and starting again in another life. The doors to the wards are unbreakable and offer solidity of purpose, thick fire doors with slit windows made of safety glass with wire knitting it into thumbnail-sized squares. Unbreakable. But someone has tried. A crack, a fracture, the size of a dart hole. Out the corner of my eye I catch a blur of colour, somebody in uniform on the pathway outside the ward. I dash forward, chap with bony knuckles loudly on the window in case they ask me what I’m doing here.

On the other side of the reinforced glass, naked women crowd around the entrance, jostling with each other to scrutinise me. In the scud magazines I’m not supposed to look at girls have glossy flicks of long hair, pink flesh that blazes from the page, breasts like balconies that jump out at you as they cavort before the camera. Here they’re dead skinned and torn from the pages of a discarded history book. Female Buddha's, floppy breasts, bellies, buttocks like brown paper bags, toothless mouths gurning. I’m more tempted to about turn and run. I find a sixpence in my duffle-coat pocket and use it to make myself heard. The old crones are pushed roughly aside. A man with a large set of keys bends over intent on getting the correct one in the lock.

I step back from the door. Because of the keys, I take him to be a nurse. But he looks only about a year or two older than me. Maybe something to do with his clothes. Trendy denim, the kind that I’m not allowed to wear; the kind that it would have been sacrilege to iron -   matching open-necked shirt and jeans with gleaming gold buttons. Compared to my short-back and sides his hair is a fizz-bomb. Soft-brown moccasins, with tassels. His mouth slides into a smile.  I smile back. He points to a switch at the side of the door, a Bakelite switch. He switches it on and off experimentally. We hear the peeling bell inside the ward.

'Come in', he laughs. 'I don't want any of them escaping'. He sticks his hand in his breast pocket to check he still has the keys.