Love you to death 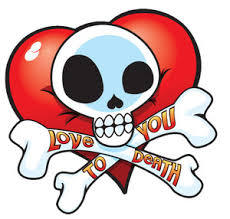 Love You to Death: A Year of Domestic Violence BBC 2,  9pm (iPlayer)

Produced and directed by Vanessa Engels, hers is the narrative voice that asks difficult questions of those left behind and she also asks those involved to read out, to honour, and give voice, to the 86 women killed in Britain by their partner or ex-partner in 2013. It’s a lament, the equivalent of a bugle playing the The Last Post at funerals, or the young keening voice of Flowers of the Forest sung by a young Scottish lassie, and there’s a sad beauty and a kind of knowing in this documentary.

As a would-be writer I look for patterns. The easiest place is to look at is the patterns words make.  Murdered by your husband or boyfriend makes explicit a semantic concern that is already present and is termed a cognate object. The object of course is the woman, and the thinking part, listen to those gears turning, are in the man’s, the murderer’s head. An object may be an object of affection, of love even, but ownership is never in doubt.

Stephen Barnsdale-Quean strangled his wife with a length of metal chain he bought from B&Q.  He checked her Facebook messages and kept her debit card in his wallet.

Chloe Siokos, 80, had her throat slit by her ex-husband of 40 years, who lived downstairs, after which he doused her body with petrol and set fire to her flat.

Assia Newton, 44, was strangled with a dog lead at home in Pencoed, Wales, by her husband of 20 years. He had installed an app on her mobile that enabled him to hear the name of everyone who called her and read her messages. One of her daughters recalled how he liked to read the name out from his own phone, to remind her, he knew that she knew. Ownership.

‘Maybe I was always drowning,’ says the narrator Aljaz in Richard Flanagan’s, Death of a River Guide, and you get that sense of the 86 women killed and the thousands of other victims of domestic violence by male partners in Britain (and the rest of the world) are always drowning.

I’m not a big fan of Raymond Carver but I re-read what is arguably is most famous and best short story: What We Talk about When we Talk about Love. Man-woman; man-woman; two sets of partners are drunk and sitting around a wooden table talking about what is meant by love. ‘Terri said the man she lived with before she lived with Mel loved her so much he tried to kill her. Then Terri said, “He beat me up one night. He dragged me around the living room by my ankles. He kept saying, ‘I love you, I love you, you bitch.’”

Compare this with Kirsty Humphrey, 23, from Colchester. She was stabbed to death by her boyfriend of nine months. He changed his trousers, put the washing on, and left the house. Her five-year-old daughter, Brooke, sat with her mother’s body all night. She had seen and heard everything – “get up you whore,” he reportedly shouted at Kirsty, when she was already dead.

But Terri’s refrain that the man that tried to kill her loved her so much is something most of us have heard before.

I was around seven-years old, sitting in the living room, when dad and mum were arguing in the kitchen, and she crumpled at his feet when he punched her. I shot out the front door and ran all the way to Parkhall shops. I guess if this were a short story I’d say the world was full of darkness and it was raining. I was shivering. That I’d no jacket, no shoes on my feet, and it felt like an axe had been taking to my guts. I’d probably go over the top, like I’m prone to do with descriptive phrases, and compare the sound of my sobbing to a river breaking its banks. I do remember being determined never to go back home. Then it slowly dawning on me, I’d nowhere else to go.

This is the most familiar pattern of all –nowhere else to go. Vanessa Engel’s fudges it here, ‘Some police forces are very good now’. And we get the usual pish about helplines at the end of the programme.

But that was the 1980s. The world is much smaller place. The chances of Jenny getting a place in a Women’s Aid refuge would be the equivalent of getting on a mission to Mars. Cuts. Cuts. Cuts. If people are drowning paddle the other way and tell them it’s their fault for not working hard enough, doing enough, or being rich enough.  Rhetoric costs little. Housing is a fungible asset in which the rich accumulate wealth and the poor hang on if they can. A toxic mix in which we peddle harder and harder the excuses we want to be true –if only, she hadn’t done this I wouldn’t have done that.

‘Happy Memories’ can ‘spoil’, suggests in Lydia Davis in her Collected Stories, they can also ‘be erased,’ can start out well and but end badly. One of Assia Newton’s daughter’s keeps in contact with her dad, who is in prison. She says he wasn’t all bad, helped around the house, and was good to his mum.  And she has moved in with her paternal grandparents. Her two sisters want nothing to do with their father or her.

Mel, the cardiologist, 'When we Talk About Love', says of his first wife that he must have some point have loved her, but now ‘She’s vicious’.  Mel’s first wife, is of course, vicious for bleeding him dry. ‘I’m praying she’ll get stung to death by a swarm of fucking bees.’ Mel has to support her and his two kids – and even her boyfriend has got in on the act. It’s just his first wife Mel wants dead—he sees himself as the good guy, the reasonable guy—he’d make sure the kids weren’t home when he turned up in a padded coat with a hive of bees. Cognate object. Not really a person, a thing to be gotten rid of.

Patterns. My mum, of course, devotedly nursed my dad when he had terminal cancer. She loved him to death and perhaps beyond that, after all she did have dementia.

Patterns. When I think about it now by the time I returned home as a wee boy, my brothers and sisters would be there. Uncle Jim in the kitchen with da and a bottle of whisky and cans of beer. A cloud of fag smoke and Auntie Phyllis and mum and endless cups of tea. And there’s a safety in numbers, so many bodies squashed together, not enough chairs, and so many people yakking, yakking, yakking. But I’ve lost time. It’s a five minute walk from the Parkhall shops home. We didn’t have a phone in the house. The McFaddens didn’t have a phone in their house in Mountblow. Only rich folk had cars. I’m not sure how they heard about Da punching Mum. How my Uncle Jim and Auntie Phyllis arrived at my house before me remains unclear. Where did I go to next? I don’t know.  Flowers of the Forest. An unhappy memory can be erased, but if you are a writer that’s the last thing you want to do.

Hi Jack,
My name is Ian Skewis and I have a novel entitled A Murder Of Crows which is being crowd funded on Unbound. I am planning a launch event on the 21st of this month in Glasgow with fellow author Jennie Ensor and Gavin Mitchell (from television's Still Game) and wondered if you would like to come along and maybe explain to the audience how you funded your book and to talk a bit about Unbound. You could also read an extract from your work and maybe get some new sales in the process?
Let me know asap as I'm publishing some flyers within the next couple of days for the event.
Best Wishes