Aye, I remember it well. 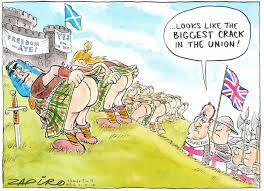 For those of you that hadn’t noticed there’s been an election. A success for the Conservative Party. A failure for democracy and poor people. These things go in cycles. Remember the 1970s. Clunk click every trip (oh dear). 1980s. Fifty Labour MPs were elected to Parliament for Scottish seats to save us from the ravages of Thatcherism, among them Donald Dewar. They were taunts from the Scottish National Party (SNP) about being a ‘feeble fifty’ because the Conservative Party dominated the House of Commons with a working majority. The rest is history. 2015 and 56 SNP members out of 59 Scottish seats are elected to Parliament. The Conservative Party have a working majority. David Cameron that bastard child of Milton Friedman and Margaret Thatcher is ready to go to war with the poor.

But there’s no need to look North. Look to Hollywood. If they can make a film about the Iron Lady saving Britain think how many films they can make about the youngest MP since Adam and Eve voting to leave the garden? The opening shot would have to be Big Ben and the bell tolling.  That’s to let the American audience say hey, it’s Britain, and we have a special relationship in which we both take money from the poorest and give it to the richest in the hope we can have the richest poorest people in the world. Well, that’s the theory.

Let’s print the legend.  Mhairi Black. Great name. She hates Celtic supporters which is a good start for hating Tories. She needs eyebrow-guards (thanks for that Claudine) but all we have to do is put a pair of black NHS specs on her. Obviously she’ll need to try dressing down, perhaps with a pink Partick Thistle tracksuit and white Ked trainers. She’d need to lose a few debates to people that don’t really understand her, with baying Tories calling for blood. Then just when we think she’s been broken, by something trivial like being found to be a shareholder of the new public-private Trident equity scheme, paid for her by expenses, she takes her specs off. She descends down a long staircase in a figure hugging diamond-studded dress. Six hundred and forty nine Members of Parliament stand at the bottom of the stairs looking up at her.  She has that look on her face that says no more stupid Mhairi, I am Kim Basinger Black and I couldn’t see it with these cheap NHS specs on. Tory MP’s stop braying and turn to each other and say ‘I never realised she was so beautiful. She’s probably right about everything she’s saying about poor people being the new blacks. Let’s stop voting to give ourselves more money and give something back.’

David Cameron tries to date her, but she turns him down for that nice Crown Prince that’s been deported and can now come back from scrounging elsewhere and live happily ever after in affluent swinging London.

Nicola Sturgeon could play Mhairi’s older sister. When she first turns up at the House of Commons she’s turned away by a bouncer, ‘Not tonight doll. Six hundred and fifty seats. The place is full. Beat it.’

She vows revenge. Hollywood likes Velcro and old-fashioned Gatling guns. Her dad hands her a saltire flag. She blindfolds herself. She assembles the machine-gun from the foam-lined suitcase all First World War guns are parcelled in with a sign that states ‘for pacifist fox hunters only’. She has bigger game in mind. She’s not willing to wait, like Alex Salmond, to become a proper grown-up MP. But she meets a drunk in a bar called Jock. All drunks in a bar are called Jock. He’s really a Buddhist monk, down on his luck. ‘If you can snatch the pebbles from my hand, then you’ll be ready.’ But Nicola with all that kit on can hardly remain standing. She gets flung out for being drunk and Scottish, which is enough evidence in any policeman’s IPad of likely stereotypes that need to be immediately arrested for their own safety. She spends the night in the slammer. Mends the errors of her ways. Gets to be a dazzling bridesmaid at Mhairi’s wedding. She’s piped in. Everyone wears kilts, because everybody in Scotland, man, woman and child, wear kilts all the time. And it never rains. That’s Hollywood. Here’s reality. We’re—f*****