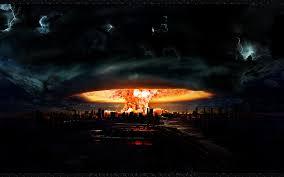 Apocalypses echo what we know. The world will end. Three score years and ten. Well I’m looking at the tens. I’m not thumbing my nose and saying ‘Har, Har,’ because I’ll be dead. Let’s face it that kills any argument.

We all know what this mean. Helen Macdonald was a wee lassie in the nineteen-sixties. She was instructed by her teacher how to make a nuclear fallout shelter in the cupboard beneath the stairs with old coats and a flask of tea.  But she was a nervous kind of girl. Her dad was far more practical. She tried to rope him into helping, but he told her not to be so daft. They lived close to a base and would be incinerated almost immediately. But not to worry. They wouldn’t know anything about it.

History shows that weapons when developed cannot be undeveloped. Fukushima, Chernobyl, Three-mile Island, small blips in a bigger war. International scientist suggested the atomic clock is at five minutes to midnight. But it’s been that way for quite a while, most of my life. I’m not worried, honest.

The Third World War started. I must take some responsibility for this. We in Britain exported the industrial revolution and the world’s growing reliance of fossil fuels. The effects are still up there in parts-per million and they’re not going away. We add grist to the satanic mills and an increasing temperature. We’ll have less water for drinking. Less water to irrigate crops. And less land to grow crops. It’s too early to suggest a pattern or how it will pan out, but countries with the most people China, India, Pakistan have nuclear weapons. India have over a billion people. They control drinking and irrigation water such as the Ganges which flows into Bangladesh with a population of just under 170 million, on par with the population of their neighbours Pakistan. With tens of millions of people on the move I’d suggest the atomic clock be moved at least two minutes forward. Three minutes to midnight.

Global pandemic have always been with us.  The Black Death wiped out about 25 million, but the world was a smaller place. Imagine a third to a half of the population of Europe being directly affected by disease. It’s difficult to think like that. Recently we had Ebola, and it’s all about containment. Poor people’s disease. Adequate screening. We think if we can keep it over there we’ll be safe. But there’s no way of knowing. It’s a scientific arm’s race in which diseases mutate faster than we can fix them. And there’s always that suspicion that somebody somewhere will infect us on purpose. Three minutes to midnight.

There are almost nine million non-hominid species sharing out planet (excluding bacteria). There are two baselines. One is the natural extinction rate if we, the human race, weren’t here. The other is measuring the effect we have on this ‘natural’ wastage rate. The National Geographic puts man’s impact as 1000 times greater than this background noise. The word decimate comes from the Roman legions putting to the sword 1 in 10 of their legionnaires who had not fought well enough, or had committed mutiny or desertion. It acted as an example to others. The decimation of our natural environment is ten to the power of three that magnitude. Global warming it going to put a different kind of strain on our relationship with other species. It may be a pyrrhic victory with the only ones left being man and man’s best friend. Best start stocking in the Pedigree Chum. Hot dog could be taken literally.

The Singleton seems a bit silly. It’s something we know about from sci-fi movies and Star Trek. Think of on-the run androids from Blade Runner. The out of control robot Will Smith is tracking in I, Robot. These are flavours of what the singleton means in the same way that Google glass, cars that drive themselves, and Apple watches that monitor health are aspects of enhancements that add to what we are, or what we are becoming. You look at automation such as Herb robots for housework. On the other side of that is the automation of mental work. Template programmes used by doctors to make diagnosis (machine does the thinking - the medical profession takes the credit). It’s been over twenty years since Deep Blue beat the world champion at chess. Bridge, checkers, Jeopardy! Machine learning wins time after time. Cinema again.  The ultimate indestructible robot Gort, mediated by Klaatu, who brought peace and the sword. Drones will deliver pizza and packages for Amazon, but in the not too distant future these same drones will be carrying passengers.  It’s a familiar world. But what happens in that blink of an eye when the machine learns about themselves and gains an awareness of existence, consciousness? With a seed Artificial Intelligence’s ability to read all of human history in a day we have created not so much a machine as a god. Our intellect and slow processing speed places us as the equivalent of woodlice to man. Venture capitalists such as Steve Joverston suggest ‘we’ll probably make good pets’. Three-D printers can print screws. Machines can make themselves. What need they for woodlice? I guess we like to think there’ll be some kind of Homer Simpson moment when we thwart the machines superior intellectual and physical abilities, including reproduction, by sticking it with a pastrami sandwich.

At a cinema near you. Global warming has begun. I’d guess in the thirty-odd years I’ve left it’ll begin to bite. I’m sure all these other scenarios will kick in at the same time. The singleton one is the stupidest one, but unlikely doesn’t mean impossible and when impossible becomes probable there won’t be time to react. Your children and your children’s children won’t thank you for the world you’ve left them –if we’re still here. A minute to midnight.