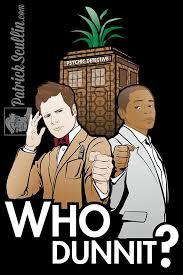 I need to tell you about my alibi, before I tell you what I need an alibi for. As we know anybody that says they’re not drunk and fail to notice that the El Clasico of Real Madrid v Barcelona they are supposedly watching suddenly involves Liverpool swarming towards Manchester City’s goal is on a shaky barstool. I plead guilty to that. And I’d call upon one David Brown to corroborate this metafiction.

You see I never saw Dr Who last night. In fact the last time I saw Dr Who Worzel Gummidge and Aunt Sally were in it, and Daleks could be knocked over with an elbow and sprinkling of tin foil. But from what I’ve read last night’s episode was pretty scary. Calls were made from sober-minded viewers (which rules me out) protesting about the 9pm watershed and kids’ heads being held in a vice and forced to watch Dr Who’s denouement.

Let me tell you how these things work. Over a year ago a team of scriptwriters would get together in Cardiff. They would storyboard ideas for that series of Dr Who. Then a few months later scriptwriters take these narrative ideas and turn them into the words and action you see on your screen. As surely as rain falls on Clydebank, and a bus turns up just before you get to the bus stop, the end of a series must end with a big bang. Sometimes it’s a plane falling from the sky, or a house fire, or sometimes something to do with ravens.

I don’t have a team of scriptwriters at my beck and call, but if- ok then, when- you finally read my book don’t think I stole some cardboard and silver-paper backed ideas from Dr Who.

Daphne du Maurier’s notebook with ideas for Rebecca were cited in her court case against plagiarism in the United States. I don’t want to call on Wullie Dalzeil as my lead witness because he always remembers the date and time he beat me at pool with a flukie black ball in the bottom pocket. Obviously any fair-minded judge and jury would take a look at him and decide I was guilty of something much worse than plagiarism if I had pals like that.

I am guilty, but not of plagiarism. All I need is enough money to sue BBC and make a raid on their prop’s department in deepest Wales. If Dr Who’s ‘girlfriend’ can get knocked off by a raven then I’m for the birds. It was my idea and I saw it first. Makes you think of that medieval mind-set of ideas floating in the ether ready to be snatched down and used. Unplug your telly!