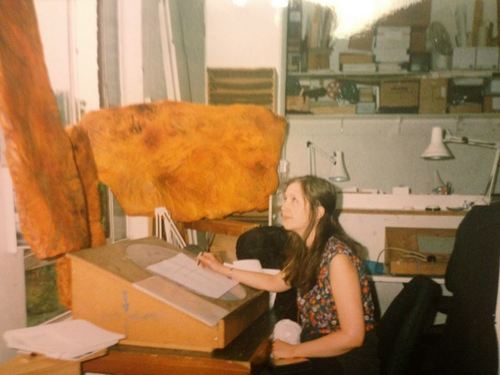 Welcome and thank you to all new supporters, and extended gratitude to the long-standing ones for your patience on this campaign. Please be rest assured that content production is underway - I just need a famous person now to tweet about the project!

Evidence of an orange obsession!

The 4th of October marked the 20 year anniversary since I started my MA in Animation at the Royal College of Art. This photo shows me back then with the cave backdrops that I made for my second year film. Everyone at the time told me it was strange I’d painted them orange, they said caves were grey. I must have known they were right because I even visited some caves as part of my research - yet still I was convinced the walls should be orange.

Today I would like to offer you a sneak peak of some writing from ‘Like an Orange’, that not only brings in the book’s theme of art, memories and identity, but describes the first ever time I unfathomably chose orange (that I remember anyway)…

The first painting I ever made was pure orange. It was at playschool and I would have been about 3 years old. There was something very attractive about the tubs of paint. Each their own uniform colour, hard on the outside with a wet version of itself on the inside that I could take out and put on the world. I could feel the paper as it met the bristles of my brush even though my hand was gripping only the handle. The impact of touch bristling through the wood like a wave, accompanied by a faint scratchy sound and a smell that nestles between the eyes. Controlling with clumsy coordination, this was an early experience of extention and expression. A tendril of me, reaching out to co-create with what was there.

I was aware it was my first painting. I knew there were such things, and most of the ones I had seen, probably in my Ladybird books, were of things. But I felt I couldn’t - or rather, shouldn’t - do a painting of something, because why that something and not another something? It made sense to me just cover the paper with one colour. To be as basic as I possibly could for my first painting. I chose orange.

So this I did. When the grown ups saw me at work, one of them laughed and did something to my painting. It wasn’t until afterward, and not long afterward, that I understood what I had done that was so funny. My mum was very good at relaying anecdotes to me, even about myself, and this was one of them. What I had done, was to go over my name that they had written in the corner. When the woman laughed and did something, the thing she did was to write my name again in a different corner. I went over it again!

Of course, I hadn’t learned to read or write yet. It’s almost unfathomable to think now that I had no idea those black markings on the paper somehow meant ‘Wallis’, my name, me. Why wouldn’t I go over them? I had very good reasons to cover the entire paper in one colour.

Thank you for reading! I have dozens of examples of the orange theme being a prevalent one in my life that I will explore through the book in relation to the brain injury survivors I met at Headway, attaching various other themes and a time line.

On a slightly different note, if there are any budding cartoonists or graphic novelists out there, you may like to consider the CPD workshops that are being run by LDC (Laydeez Do Comics - I’m a London coordinator). Over the course of this month and next, professionals in the field will be delivering between them everything you need to know about getting a comic or graphic novel done and published. Find out more here: https://ldcomics.com/event/ldc-professional-development-workshops-oct-nov-2019/

Finally, I am currently developing my own workshops called Embodied Memory Retrieval and Empathic Drawing - if this peaks your interest and you'd like to learn more, please email me directly at walliseates@gmail.com