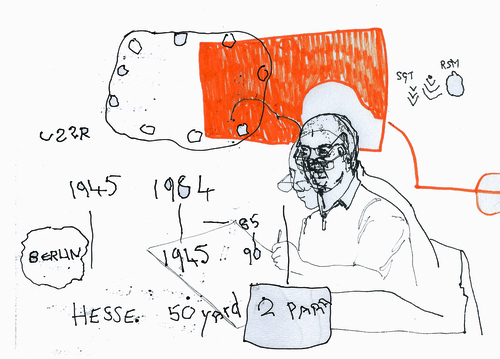 Hello one and all

It is said that the forging of connections plays a powerful role in creativity and memory. One of the main themes of ‘Like an Orange’ is connectivity, within and with each other. So in keeping with this, I’d like to share with you today how I came to decide what to write for this very update – it’s a perfect example of my neurons having a chat!

As I sat here, having a think, two subjects kept surfacing. One made perfect sense – it was ex-soldier Nick, a brain injury survivor I worked with at Headway. But the other was the book I’ve just started reading, ‘Siddhartha’ by Hermann Hesse. It really began to niggle, why am I reminded of my book everytime I think about Nick? So, I dug out a piece of work we did together, and there it was – the bottom left hand corner had the name ‘Hesse’ (see above).

Working with Nick was one of my absolute highlights during my residency. We would arrange a time for me to visit his desk, and over the course of an hour, he would regale me with tales of being in the Paratroops. Having suffered a stroke a few years back, Nick had difficulty in speaking, and so the telling of his anecdotes would be a joint operation – me repeating back what I thought he said, him confirming or repeating again, and sometimes scribbling notes and diagrams. The image above are his notes placed on top of a sketch I did of him. Once I fully understood his stories we would high-five, shake hands, and high-five again! It was joyous!

This particular story was about a time when Nick saw the Nazi Rudolf Hesse (not the author Hermann) – they made eye contact and Nick’s blood ran cold. I hope to capture Nick’s stories in ‘Like an Orange’ and do them full justice, helped of course by some of his fantastic paintings (see below).

Finally, a great big THANK YOU and welcome to all new supporters, and to everyone for helping me out on social media. You are all amazing. 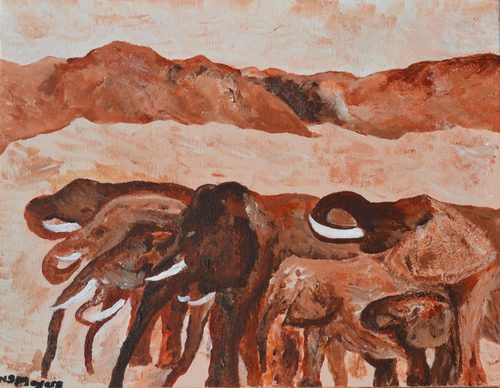 I'm thinking of relating this painting by Nick to his stories of marching with his troops...