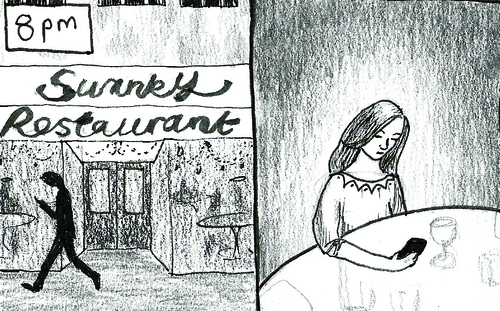 Hello everyone, and welcome to new supporters!

An old witchy-ism that I think of often, which is of course apt for October. I have been reminded of it rather fruitfully already this month (orange flavoured of course, in disguise as pumpkin), when I was incredibly lucky to be broom-sticked away on an artist’s retreat in Southend, courtesy of the arts organisation, Metal. Thank you, Metal!!

Myself and 9 other comics creators had the sheer luxury of immersing ourselves in our work for 5 days. No cooking, no going to the shops, no doing the day job – amazing! Plus we were all like-minded and although most of us were self-confessed introverts, we very much enjoyed getting to know each other alongside developing our creative work…which reminded me of something…of course, Submit to Love studios!

I didn’t think of this straightaway. It wasn’t until I was ink-deep into a panel about Headway member ‘Tim’ being at a dinner party, that I realised I was pretty much drawing my current experience – lots of people round a table! This made me reflect on how subtly we can be influenced, or in this case, inspired, and the incredible service that Headway East London offers its members by providing a space that invites private immersion, while at the same time, community. It is so fertile!

But there is a cautionary aspect to this tale, the one that is the story I was actually drawing. In keeping with Tim’s wishes, the story warns against checking phones while going up stairs.

Entering the world of one’s phone is similar, but not the same as, being in a studio space – it invites the mind to go elsewhere, but the body isn’t necessarily grounded. After the dinner party, Tim got some bad news while he was on the top of some stairs and he acted out a feeling. Not onto paper, or into a sculpture, but a simple movement that made him lose his footing and tumble almost to his death.

There is a time and place for this modern wizardry that is remote connecting, and being in transit isn’t one of them. It pains Tim to see this happen so much, and since hearing his story, it does me too. So please take care. Tim was incredibly lucky for reasons that I’ll keep for the book…

So, on a lighter note, if I see orange-bobbing is the latest craze this year, I’ll be doffing my pointy hat to you all. Thank you again for your ongoing support,

PS Headway East London have started a new magazine called ‘Matter’ that is definitely a must-read! It might even feature some of the same people who will be in ‘Like an Orange’ and will no doubt influence my work as I continue with this project. You can order it here: www.mattermag.org