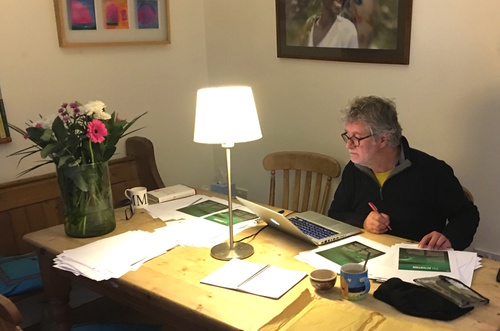 Almost there. A few days back we received the actual real printed proofs of Lifelines, so that we could literally cross the t’s and dot the i’s (well, not strictly literally, though we did put in commas, check spelling, and that). That’s what Malcolm’s doing in the picture. Martin was making the tea.

Suddenly it seems real: something in our grubby little hands, not just on a screen. It’s taken the best part of two years to get here. Simon Gunn has done a stellar design job on the pages, giving our prose an elevation it scarcely deserves.

The good people at Unbound estimate that the bespoke limited edition hardback will be arriving on the doorsteps of everyone who has backed it this summer.

We’ve asked one or two people who are quite good at making books themselves if they'd look at this one and consider saying something at least vaguely promising about it. Professor Brené Brown called it 'beautiful, wise, and... playful.’ Novelist Tim Winton says it provides, ‘a steadying of the nerves for the onward journey’. Frankly, we’re astonished.