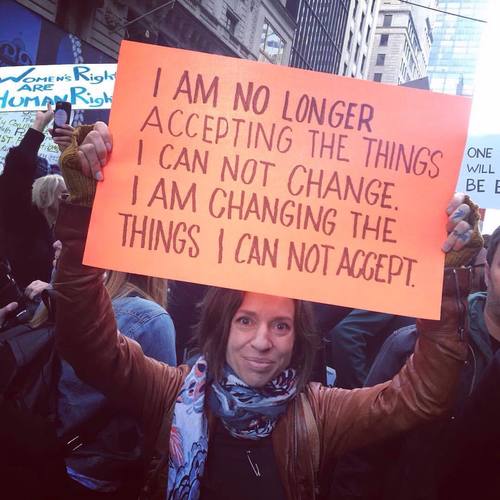 Does a million people on a march make any difference? Do two million?

If someone is determined to enact laws which target people for their religious beliefs or their place of birth, will they think twice at seeing TV images of thousands of people taking to the streets to oppose them?

The Women’s March, the day after the Presidential Inauguration, drew record crowds in the US and beyond. Orders suspending refugee resettlement and barring people from majority-Muslim nations from the US, sparked demonstrations around the world.

Climate change, LGBT+ rights, gender equality, anti-capitalism. Critics claim the demonstrations are incoherent, vague, naive. Against the patriarchy, in favour of rainbows; against tanks, in favour of flowers. But the patriarchy is resilient. Like racism and homophobia, like hatred of Jews or hatred of Muslims. One woman's placard summed it up.  “I can’t believe I still have to protest this fucking shit . . .”  She had borrowed the slogan from a woman on a Black Lives Matter protest in 2014. She couldn’t believe it either.

And that’s the point – after all these years, this shit is still there. Despite all the movements, we still need another one. 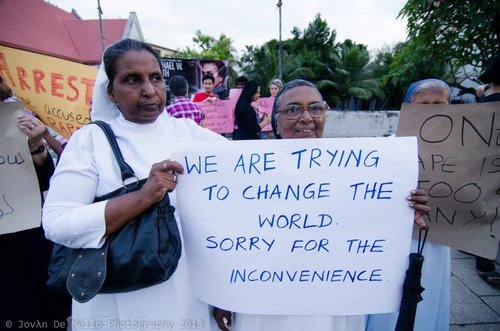 Sometimes a great uprising of people power ignites rapid and visible political change – the fall of the Berlin Wall is one of the most famous. More likely, charge the sceptics, marches and demonstrations change nothing. They’re just a physical edition of online virtue-signalling, a way of saying to like-minded people that you’re on the same team. Not a way to engage with the arguments of your opponent. When did Occupy achieve the downfall of capitalism ?

But seeing the effectiveness of a protest in short-term policy shifts, is not the only lens with which to view it. There might be  something deeper going on. Asked how he'd like to be remembered, the writer and neurologist Oliver Sacks said he’d like it to be thought “That I had listened carefully to what patients and others have told me, that I’ve tried to imagine what it was like for them." To use a biblical term he added, he'd like it to be thought that he "bore witness.”

Sacks understood the significance of bearing witness to the lives of others - often those ostracised or ignored. The most powerful uprisings of public disquiet or longing for social change, are not those which are simply about standing up for people but those which are about standing alongside people.  Standing with people when the march is over,  people where we live or work that powerful forces seem to be standing against.

Elie Wiesel lost his sister and mother in Auschwitz, and his father at Buchenwald. He wrote the novel, Night, about his first night in a camp: “those moments that murdered my god and my soul and turned my dreams to ashes for ever.”  Wiesel spent much of his life with Holocaust survivors and came to see his role as that of “a witness”, to guard against history repeating itself.  “To listen to a witness is to become a witness and that consoles us.”

How effective is it when we march on the streets, sign online petitions, engage in the argument ?  “We may never know what will result of these actions,” said Gandhi, ‘But if you do nothing there will be no results.”

“Our strategy should be not only to confront empire, but to lay siege to it. To deprive it of oxygen. To shame it. To mock it. With our art, our music, our literature, our stubbornness, our joy, our brilliance, our sheer relentlessness – and our ability to tell our own stories. Stories that are different from the ones we’re being brainwashed to believe. The corporate revolution will collapse if we refuse to buy what they are selling – their ideas, their version of history, their wars, their weapons, their notion of inevitability.  Remember this: We be many and they be few. They need us more than we need them. Another world is not only possible, she is on her way. On a quiet day, I can hear her breathing.”

That banner at the top doesn't make any sense though does it? Just one of those things that sound good but don't mean anything. Maybe: "I have to accept the things I cannot change. But I also have to change the things I cannot accept." Not as catchy, but also not bollocks. GP