A brief ‘Ed’s up’ from a Suffolk field

Greetings, and huge thanks to you who’ve pledged for The 95. Your support means a great deal. Welcome to our shed. Here’s a note and a photo that I’ve tacked to the wall.

I’ve been reading The Barn at the End of the World: The apprenticeship of a Quaker, Buddhist shepherd by Mary Rose O’Reilley. Just the title resonates with me in all sorts of ways. I’m a newbie amateur shepherd in a small local consortium in the Suffolk village where I live. We moved to the country seven years ago this month, and one of the things that I’m learning is to pay attention to small details.

I’m not finding this easy because my mind still tends to idle at urban speed. Encouraged by O’Reilley, I’ve been having a go at walking meditation, breathing in and out with alternate steps. Oddly, it slows down my mind enough to notice things like the vibrant blue of the flowers on the rosemary bush, and a flurry of long-tailed tits using the old apple tree as a staging post (I only know what they are by looking them up in a book after).

Slowing down has helped me to spend time watching our new Norfolk Horn ram Ed (because of his Norfolk connections and certain other characteristics, we’ve called him Ed Balls, or – as Norwich City FC fans will understand – the Chairman). I knew the basics of what a ram does, but not in detail. But standing still and quiet  in the middle of our small flock I was fascinated to observe his relative politeness.

He approached his chosen ewe, nudged her gently with his head, rubbed his right leg against her flank, stood next to her a while, until she nudged him back. This ‘courtship’ ritual went on for two or three minutes before he mounted her (three times). And then the two settled back to their ruminant grazing.

I’m not about to make a blinding philosophical perception out of this, but I suspect something about the value of walking, breathing, slowing, observing, will find its way into The 95. Meanwhile, I’m posting a post-coital pic of Ed and his current partner. 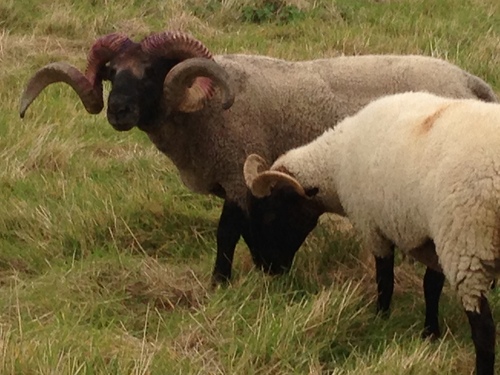