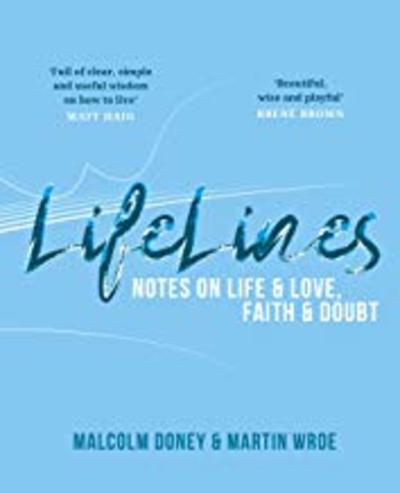 Non fiction
You made Lifelines: Notes on Life & Love, Faith & Doubt a reality. It's available in all good book stores now.
$8
51 pledges

Copy of the ebook.
Buy now

First edition of the hardback, signed with a personal message by the authors and your name in the book.
$75  + shipping
27 pledges

First edition of the hardback, signed by the authors, plus your own digital edition and five 95 postcards.
$115  + shipping
16 pledges

A first edition of the hardback for you, together with another for a friend, each signed with a personal message by the authors, and your names in the book.
$145  + shipping
16 pledges

A signed first edition of the hardback plus a limited edition ‘95’ print created by Malcolm, a vivid reinterpretation based loosely on the cover artwork.
$210  + shipping
4 pledges

Two signed first editions of hardback, your name in back, plus limited edition ’95’ print (see above) and set of five fridge-magnet Notes and five postcard Notes from the book.
$300  + shipping
5 pledges

A customised 300-word ‘note’ from the authors on a theme of your choice delivered as a specially designed limited-edition print. Plus a signed first edition of the hardback, with your name in the back.
$450  + shipping
3 pledges

A good talking to

The authors have delivered scores of talks to all kinds of audiences and every now and then, one of them is quite good. Martin or Malcolm will deliver the definitive quite good talk on ‘The 95’ to your own tribe in your own setting: college, school, company, union, church, synagogue or temple. Includes five copies of the hardback.
$750  + shipping
9 pledges

From naming or christening a child, to planning a civil partnership / wedding or saying goodbye to a loved one, Malcolm and Martin - drawing on their experience as voluntary vicars - will help you create a customised ceremony (suggesting structure, themes, readings etc) to mark one of life’s great rites of passage.

Life is beautiful . . . and baffling. Any new day may be lit up with beauty and wonder but the next overcast with pain and sadness.

Our time on earth is shot through with questions so vast that we can’t get our minds around them. Humans have always tried to find ways to respond to those questions. It’s usually called ‘wisdom’, and before writing was thought up, it was handed down in stories.

Some of this was bottled in religion and became congealed into creeds and regulations. That’s all right for some, but many of us don’t want to be told what to believe, we’re shy of certainty, suspicious of authority.

We still live with the questions though. Like how the big moments – the birth of a child or the death of a friend – can leave us wondering about how to live in the small moments.

That’s what this book is about. A collection of fieldnotes on how we can live this life, and live it well.

From poets and songwriters, activists and artists, from people with faith, and people without. We’ve nicked their best ideas and added some of our own. Clues and pointers, rather than terms and conditions.

We’re calling it The 95 because 500 years ago, an obscure German monk called Martin Luther came up with his own 95 notes, which he nailed to a church door in Wittenberg. It caused pandemonium at the time but they’re looking pretty tired now. So, we figured it might be time for another 95.

The best things in life aren’t things Justice is what love looks like in public If the only prayer you ever pray is ‘Thanks’, that will be enough Good habits are a good habit Do unto those downstream as you’d have those upstream do unto you Life is depth not width Love is a verb Ritual is poetry in action Everybody hurts What you know matters, but who you are matters more

First edition of the hardback
View all 10 rewards