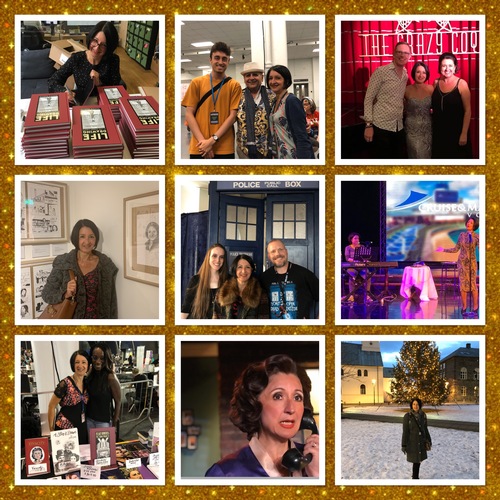 Not too late to wish you all a very happy New Year and decade, I hope? It is the second week of January and I'm still blinking my eyes like a newborn, adjusting to the hazy new world of the 20's. Before I 'accept and move on', let me cast my mind back to the last few months of what was for me, the most hectic, eclectic whirlwind of activity since "Life Drawing" was published. The nine panel grid above captures just some of what was an eventful, sometimes stressful but always exciting period to end the decade with a bang!

My last post brought you up to date with the launch and various conventions. One of the major spin offs of the book was that I created a cabaret with my wonderful musical director and good friend Inga Davis-Rutter and which our chum, Ben Stock, himself an experienced cabaret performer, directed. We played to two sold-out houses at London's Crazy Coqs cabaret venue in September.

I did radio interviews the length and breadth of the UK ( thanks to digital technology) including a guest spot on Gaby Roslin's radio show, and a television interview on London Live. October was the busiest time..a solo exhibition at the Cartoon Museum,a life drawing session also at the museum, a guest invitation to the TimeLash Doctor Who convention in Germany followed by a week's cruise on the Mediterranean as a cabaret guest for the 'Legends of the Musicals' themed trip and completed my global trip as a guest exhibitor at the Malta Comic Con All wonderful experiences and on each occasion I sold lots of my books!

More locally, I was invited to make my first independent bookshop visit to Brooks Bookshop in Pinner which was an intimate and very enjoyable evening in a convivial setting. The bookshop opens in the evening for wine and nibbles making it a perfect hub for authors looking to share their work.

November found me doing something brand new. Stephen Wyatt ( Doctor Who writer of The Greatest Show in the Galaxy ) has written a one woman play for me which Big Finish director Sam Clemens directed. "You Thought I Was Dead, Didn't You?" premiered for a four night run at Waterloo East Theatre, London. It was very well-received and we're looking forward to a fully fledged run later this year.

The last picture sees me framed in front of a Christmas tree outside the famous Hotel Borg in Rekjyavik. My husband, son and myself spent a few days with my Icelandic brother, Valgeir ( who is featured in my memoir!) just before Christmas.

Most of December was spent relaxing and enjoying Christmas with family.

I am now restored, recharged and ready to zoom into what promises to be a very exciting year ahead. I have something new performing wise which I'll let you know about very soon. And perhaps a new creative project percolating as well?!

In the meantime, enjoy the fresh start.Thank you for making 2019 a stand out year. I hope 2020 brings you everything you wish for and so deserve!