Well folks, we are less than 10 days away from the biggie - the late May Bank Holiday weekend when the majority of pools open once more for the season.

It's really gratifying to see so many more pools now extending their season. Hathersage have been a trail blazer in that respect, and I'm always grateful for Topsham's early season opening. Pells Pool is also one to watch - they trialled extending the back end of the season last year and I think it went well for them, so here's hoping they do it again. Extended seasons are, perhaps, more of a challenge for unheated pools but cold water swimming is on the up so it's arguably not as much of a risk as it once was.

While we wait, breathless and giddy with excitment, for the big weekend to arrive, I'd like to just remind you of a couple of really important things happening in lido land right now.

Firstly, the campaign to restore Grange-over-Sands lido for swimming is beginning to take on shape and focus that is stronger than it ever has before. There is a very solid group of people working on Save Grange Lido, so please do find them on facebook and twitter and show your support. They mainly need moral support right now, and any help you can offer in spreading the word. They are doing great work in the face of a local authority who seem unable, or unwilling, to recognise just what an asset and a draw this pool could be to its community.

Secondly, Saltdean lido is campaigning hard to raise the £100,000 it needs to release the next stage of Heritage Lottery Funding. This funding phase is critical, because it will restore the Streamline Moderne building that stands beside the pool to its former, crisp glory. That building is not only an architectural rarity and wonder, it is also critical to the long term viability of the lido as it will allow other income streams to be developed. It will also become a hub for the community that surrounds it. At £77,000 the campaign is so close to its target that it hurts. They have a camapign deadline of the end of May, so if at all possible perhaps forego a bank holiday ice lolly, or portion of chips, or a pint, and donate the money you would've spent on that to Saltdean. They'll love you for it. And so will I.

Finally, our swimming cap artowrk has been finalised, and we LOVE it. It was designed for us by the very talented swimming artist Nancy Farmer, who has already made quite the name for herself with her range of beautiful swim caps. Personally, I'm currently in love with her swimming paintings. She captures the light so perfectly. We are so grateful to her for taking on this commission. If you've pledged for a swim cap this is the design you'll be getting, you lucky things. If you want to upgrade to a swim cap pldege, to be sure to get your hands on one, you can. 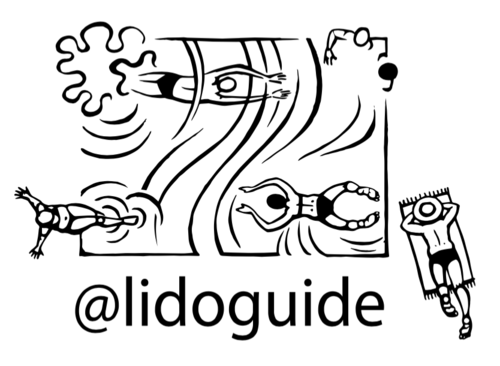