Spring is upon us, and the sunshine reveals all. In my case that includes arms that are reminiscent of just set blancmange, thanks to very little actual swimming over the winter. But the sun also encourages the greenery that has been lying dormant in the countryside to show itself, and it encourages the seasonal lido lovers to show themselves.

Many seasonal pools are yet to open, but this weekend marked the flinging open of the doors at two of the season's earliest openers; Topsham and Petersfield.

I snatched an early season lido road trip to Petersfield after work today - and if any of you want to try to tell me that it is utterly unreasonable to make a 3.5 hour round trip for a 30 minute swim, after already having done a full day at work,  you can put up your dukes and we'll take it outside.

Enjoy the season to come, we hope you are as excited as we are. 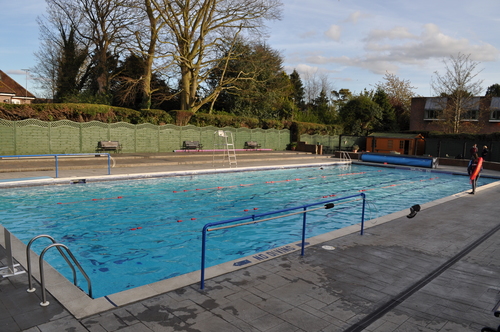 my first new lido of the year was Chesham last week. As they are heated they are open all year round (its just that i'd only learnt of its existence). Hampton is also open all year round (also heated). London Fields would usually be in that cluster too but they closed on Sunday for 4 months of work ... so yes, a few options.

Chesham is great, isn't it. I'm pleased LFL have managed to delay their repair work - they had originally touted a closure a few months ago and having delayed it means their displaced swimmers will have a wider range of options now that Parliament Hill is extending the opening hours and warming up a bit. LFL is such a well used pool. I'm very jealous of their floodlighting!

You know about Charlton I take it? South of the river, I know - and while we swimmers out here in the sticks would (and do) cheerfully make such journeys for a swim I gather that getting Londoners to cross the river is a bigger task than the crossing of the Rubicon!

Enjoyed the first outdoor swim of the year yesterday in the very lovely Hathersage outdoor pool in the Peak District. Thankfully heated which might account for it being used by a quite mixed group of patrons on a fairly chilly morning. Really nice atmosphere with a warm & friendly cafe as well.

Hathersage is wonderful, isn't it. I had a really super swim there at the tail end of last season; there were lots of highlights but I think having a warm shower, in cool air, looking up at the view of the hills beyond the bandstand was a real stand out moment for me.