Don't mention the pool cover... I did once, but I think I got away with it.

There's been quite the buzz around The Lido, a debut novel by Libby Page due out on April 19th.

The story of its publication could readily be a novel in its own right. Girl writes book alongside full time marketing job. Girl spends a year sending manuscript, fruitlessly, to publishers. Girl gets close to giving up. Girl approaches co-founder of new agency. Girl gets signed, secures six figure publishing deal and sells rights to film based on book. From slush pile to stardom. It's the publishing equivalent of swimming the English Channel within a year or so of learning to swim. Remarkable.

So the buzz is hardly surprising, and the book is undoubtedly riding the Lido zeitgeist.

The story opens with Kate, a young single journalist on a local paper and abjectly miserable with it. The streets of London have not proved to be paved with gold or, it seems, anything even remotely resembling it. The story ends with Kate transformed, and arguably just as saved as the lido that gives the novel its name. That lido is Brockwell.

Long time supporters of the Lido Guide will know that I've got an enormous soft spot for Brockwell. It's nowhere near the smartest pool in London, being a little bit shabby around the edges compared with, for example, Charlton. But what it lacks in glitz it more than makes up for with the ferocity of the love that its users have for it. They don't all love the same things about it; only the bravest of swimmers would knowingly choose to start a conversation* about whether the pool should become heated, for example. But regardless of what it is they love the passion that users of Brockwell pour into the place would fill the pool several times over.

As a result, the story of the resurrection of Brockwell lido is well known to its devotees. They may approach Page's book expecting it to tell that story. They will be either relieved or disappointed to discover that it does not. The tale is about the saving of Brockwell only in as much as the pool that is saved is based on Brockwell - and quite loosely at that given the references to lockers, a pool cover and clambering up and down ladders. Those are things that Brockwell and its users have little or no truck with. There are some lido geeks out there who might feel inclined to be rattled by factual inaccuracies such as those, but I'd encourage them to open the pages of this book on the understanding that is not, despite the title, a story about a lido - much less Brockwell lido.

It's a story about loneliness, gentrification, principles, change, and love. And it is in the latter that the charm of this book lies. It may begin, and end, with Kate but the real stars of this book are Rosemary and George. Theirs is a story that is likely to move even the hardest of readers, and will resonate with all  in one way or another. You may have experienced some of their happiness, or some of their loss. You may yearn for the kind of life they lived together. You may once have thought you had such love, only to realise you were wrong. You may hope it's not too late to achieve it. You might find Kate a bit dull, I did... but Rosemary and George or, to be more accurate, the absence of George will more than make up for that.

If you approach The Lido as a tale of lives changing and intertwining, in a community that is at least as dynamic as Rosemary and George's relationship, you won't be disappointed. If you approach it as a social history of Brockwell Lido you are as likely to be disappointed as was the woman who snippily tweeted me, when news of this book first emerged, 'It's not the true story of Brockwell lido you know'.

The Lido is not a highbrow book, and I say that without any hint of snark. The marvellous thing about books is their diversity. If you want highbrow you will find it in plenty of places, just not here. In this book you will find fine company for an untaxing afternoon stretched out on a towel at your favourite lido, and there are much worse things to have tucked into your swim bag. 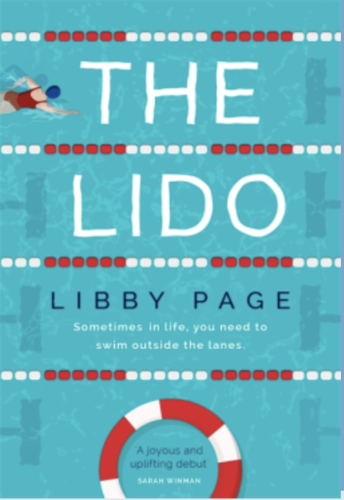