The Sunday Times best-selling collection of 125 of the world's most entertaining, inspiring and unusual letters 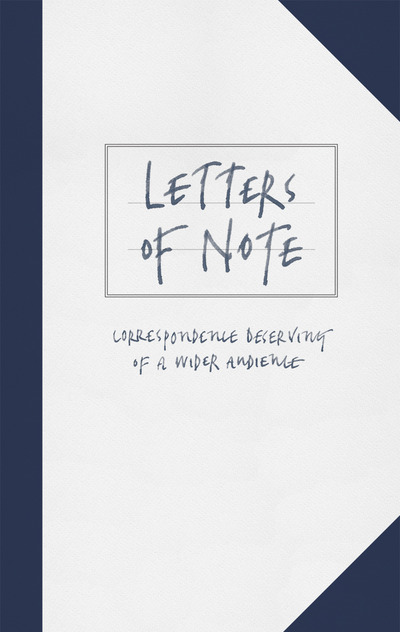 two copies of the special edition hardback (shipped together), plus the ebook

The eagerly awaited Letters of Note: Volume II is now being crowdfunded through Unbound. Pledge for the perfect companion to Letters of Note and get your name in the back of the special edition here. It's going to be just as good, or possibly even better, than the first!

Why a book?
As the pitch video explains, this book project has grown out of a website: www.lettersofnote.com, an edited collection of letters, telegrams and memos which are worthy of a wider circulation. People really seem to like the site, but there are some things a screen just can’t do. To me, letters are small artworks and this book will be catalogue of beautiful, meaningful objects.

Describe it
A large coffee-table volume with 150 letters, many of them reproduced in facsimile with an introduction by me and a transcript of the text. Unbound’s plan is to produce a physical object of great loveliness: cloth bound, using thick, uncoated paper: something that gives you the experience of holding and reading the actual letters themselves. As well as being a good read, it will make a lovely gift. It’s being printed in Germany where they understand these things.

What’s in it?
Many of the letters will have appeared on the site but I'm holding some of the best back. The main thing is that it will be an eclectic mix of the humour, seriousness, sadness and brilliance that make up our lives. Here’s a random selection of what I hope you’ll find inside:

Where does my money go?
This is going to take me eight months of work obtaining permissions, and agreement from all the parties included in the correspondence, as well as laying out the book and designing it so it works for the reader. That’s hundreds of hours hunched in front of my screen, most of it spent writing (you guessed it) polite letters.

Why Unbound?
The success of the site has meant I’ve had many publishers approaching me to publish a book, but the Unbound idea seems best for me. Let the people who like the site help me make the book. There will be plenty of chance for me to share progress and ask for advice as it goes along. We aim to publish in a year’s time.