The Pied Piper of Mostar 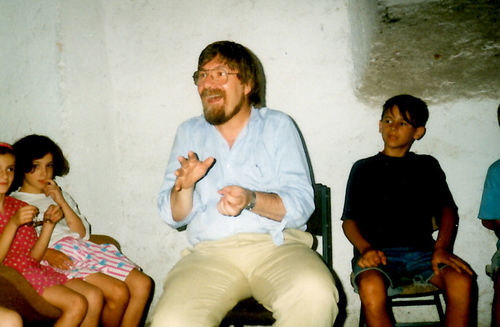 I met yesterday with Prof Nigel Osborne as he passed through London on his way from running children's workshops in Syria and Lebanon to Buxton. He was due to give a talk at the Buxton Opera House and attend the premier of a new work of his, 'Bosnian Voices', to be performed by the Royal Liverpool Philharmonic. The Chief Executive at Buxton is Simon Glinn, who played a significant role at the Pavarotti Music Centre in Mostar. 'Significant' is not strong enough. His technical skills were vital to the setting up of the centre. Here is an excerpt from 'Left Field' about Nigel's first visit to Mostar.

“War Child today still emphasises the charity's historical connections with the music world, but the first money-raiser for our work involved animals. Over the 1993 August Bank Holiday we organised a three-day event at London Zoo. There were sitar and sarangi players near the elephants, Peruvian pipers serenaded the llamas and didgeridoo players the kangaroos. There were African drummers and giraffes, gamalan players entertaining the Indonesia rhinoceros, Brazilian berimbau players the squirrel monkeys. The Chinese percussionists were kept well away from the giant panda, Ming Ming, because she needed all her concentration to breed. The most amazing sites for me were a string quartet playing Bach in the Butterfly Grotto and a lone cellist in the shadowy depths of the Aquarium entertaining the circling sharks. On the lawns, pathways and courtyards there were clowns, jugglers, stilt-walkers, magicians, dancers and acrobats, story-tellers, poets and pavement artists. Inside the monkey house we held children's workshops, art and photo exhibitions. The promotional brochure said that, 'during these three days, London Zoo, with the help of its animals, will come to the rescue of another endangered species – children threatened by the thirty wars raging across our planet.' Six months later Nigel Osborne arrived in Mostar to help the children. He was carrying a large bag full of percussion instruments. A big, bearded bear of a man, Nigel was Professor of Music at Edinburgh University. He’d heard that we were co-operating with MTV and taking music tapes into Sarajevo where he’d been trying to organise music workshops with young people, working with the Sarajevo String Quartet and collaborating with cellist, Vedran Smailović and poet, Goran Simić on two children's operas. He said he would like to run children's workshops in Mostar and it was to be the start of a long association between Nigel and War Child. It was no problem gathering interest. I had been amazed how quickly news travelled across this bombed-out ghetto and, in such a desperate place, anything out of the ordinary was news. After two years of shelling, the upper floors of the UNHCR building had been blown away. The lower floors, housing the UN office, were as secure as it got in East Mostar. By the time Nigel arrived, there were twenty children and their parents. They sat very quietly and few of the children smiled. They looked as though they were about to be told bad news, not be offered the chance to bang drums and blow whistles. I looked around the room and realised most of them would have had no memory of anything but fear. One mother sat with her blind, impassive, six-year-old daughter. I watched while Nigel tried to get the girl to play a triangle. She refused to hold it. This went on for some time until, finally, she grabbed the triangle with one hand, the metal stick with the other and struck it over and over. Her face lit up. Her mother told us that it was the first time she had seen her daughter smile in over two years. Nigel's arrival in Mostar was to result in a schools' music programme that reached 3,000 children in Mostar and the surrounding area."

NOTE: On 6 November I am giving first talk on 'Left Field' at my old school, Canford. Very kind of them to invite me there as I've told them how much I hated the place. But that was half a century ago! Here is the slideshow I will use at the start. Not that good and couldn't upload the music I wanted. Will probably have it on silently.