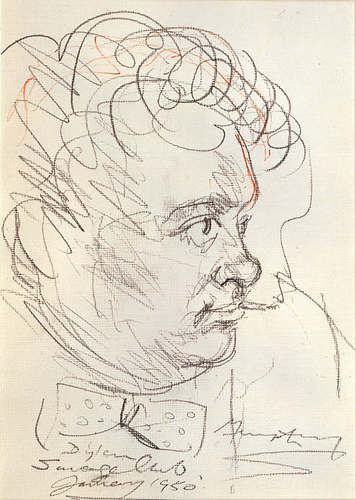 Further to my earlier blog about Dylan Thomas, here is Mervyn Levy's drawing of Dylan and his account of their schoolboy days together in Swansea. More about Mervyn's contribution to my play about Dylan in 'Left Field'.

NB: Unbound are offering £10 off all their titles until midnight of 4th November. Just enter 'AUTUMN15' at checkout.Tell your friends.

“We had, as always, tossed a farthing for who went in first. Straggling home from the Grammar School, it was a game we often played about tea-time. I lived at 56 Walter’s Road, Dylan some half a mile further up the hill, towards the Uplands where he turned into his own Cwmdonkin Drive. Here he lived in a stainless steel cube of frozen purity and icy morality, with his twitteringly feeble mother, Flo, his empty sister, Nancy, and his bleak, morose father, D J Thomas, who was our English master at the Grammar School. He was a scholarly man of deep knowledge and feverish personal frustration, who saw in Dylan a vicarious hope of his own literary redemption. As we walked home, we swung our satchels at the girls from the High School, pulling their pig-tails, and whispering obscenities into their pink ears. They squealed with pleasure or wrinkling their noses in disgust, showered us with punches and kicks. But when we reached No 56, we had reached Paradise. No sultan could have been better served. May, one of our maids, was a warm, fat, lolloping girl, who had her serious sex with Jim Russell, a club-footed man who seemed to live behind a large couch in our basement kitchen, coming out to share our eggs and chips, then disappearing again, with immense speed when we heard above, the turn of my father’s key in the lock, and his ponderous tread in the hall. May’s breast were as large as rugby balls, with rich brown aureoles and deep, purple nipples that stood to attention as you felt and sucked …. May sat on a pile of coal-sacks to indulge our pleasures, our knees often grazed or bleeding. Behind the vignette of childhood lusts rose a tower of bright green weeds, nurtured by Grandma Rubinstein, my mother’s mother, who had arrived in Wales from Russia sometime in the 1890’s, having booked a passage from Riga to New York. As with many Jews, when her ship docked at Swansea, she was told that she was in America and put ashore. She had odd little habits, smoked a clay pipe and was allegedly a witch. She dressed in black, her hair always covered by a fine, lace shawl. She was a tiny woman, like a pixie from a water-colour by Richard Dadd. Her most curious and regular habit when visiting her family at No 56 was to walk slowly up the road carrying an umbrella, wet or fine. When we heard the front gate opening we rushed, my brother, my sister and myself – to peep through the curtains of the front door, and watch her indulge in a remarkable ritual. Halfway up the short path that led from the gate to the front door was an iron grill over the coal-house below, and which the coalman would raise to empty his sacks. When my grandmother reached this point, she would stop, directly over the grill, part her legs, open and shut the umbrella a number of times as though testing its mechanism, and simultaneously piss into the coal-cellar below. Hence the weeds. From time to time the green pillar was destroyed by the avalanche of coal. But it always grew again, proudly defiant. Dylan, who had witnessed the performance, believed it had something to do with the legend of my grandmother’s witchcraft, but the rest of us were more eager to conjecture whether she wore knickers.”