Drumming in the book cover 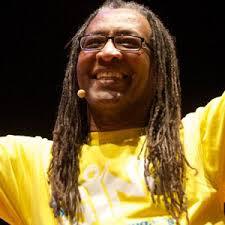 Doing final edits on Left Field, I came across Pay-Uun Hiu's amazing article in de Volkskrant from December 1997. Writing about the opening of the Pavarotti Music centre, she had this to say about Eugene Skeef:

"Born in South Africa and former co-worker of Steve Biko in the Seventies, Skeef is a phenomenal drummer and has an equally phenomenal gift for music communication. In the small room, with a view of the strip of land where an aromatic herb garden is planned to bloom, it is impossible not to hear the forceful call of Skeef’s djembe. With Skeef there is no place for quasi-serious or quasi-creative playing. 'Focus,' he demands, while rolling his dreadlocks into a ponytail. 'Do not play before I ask you to! Concentrate! Watch each other. We want to get into the spirit of the music.' Gradually the workshop takes on the air of an almost magical ritual. Every single player gets into the rhythm of his own rhythmic pattern which corresponds with the rhythmical pattern of the djembe trio formed by Skeef, Oha and Peter Vilk, a young English drummer and music psychologist. Through repetition of the pattern not a single part of the body is left unaffected by the sound. The lower djembe tones go right through your diaphragm and with their long waves provide a feeling of stability and calmness. The higher tones in the faster patterns work directly on the muscles and absorb all the concentration until everybody’s attention is solely focused on the music. When this level of concentration has been reached, Skeef increases the intensity and complexity. He not only increases the tempo, but also the difficult rhythmic combinations and the tempo in which the patterns change. With extreme precision he moves every participant just a tiny bit over their limits, while stimulating them with his djembe. His voice has become like a hurricane: 'power, power, man! Keep going! Keep watching.' Hands no longer feel pain, legs and feet are moving by themselves. Then Skeef lets his drummers go. The rhythms slow down and the drummers become kids again. 'Relax, relax. That was real power energy, man,' he says."

STOP PRESS
Russell Mills has agreed to design the book cover. He has produced record covers for Michael Nyman, Peter Gabriel, Brian Eno, Nine Inch Nails and book covers for authors such as Milan Kundera. Left Field will be published in March 2016.