Dogs are our link to paradise 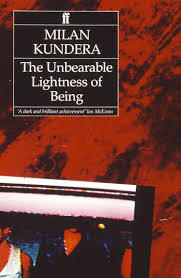 I am excited that, if the book reaches its funding target, Russell Mills will design the book cover for Left Field. He is well known for his record covers - Michael Nyman, Peter Gabriel, Brian Eno, Nine Inch Nails amongst others. His book covers include Milan Kundera's The Unbearable Lightness of Being, Samuel Beckett and Don DeLillo.

I like this from DeLillo: “I think it's only in a crisis that Americans see other people. It has to be an American crisis, of course. If two countries fight that do not supply the Americans with some precious commodity, then the education of the public does not take place. But when the dictator falls, when the oil is threatened, then you turn on the television and they tell you where the country is, what the language is, how to pronounce the names of the leaders, what the religion is all about, and maybe you can cut out recipes in the newspaper of Persian dishes. There's always a period of curious fear between the first sweet-smelling breeze and the time when the rain comes cracking down. I've come to think of Europe as a hardcover book, America as the paperback version.”

I try to follow Becket's, “Ever failed. No matter. Try Again. Fail again. Fail better.” But having just written a new chapter for my book on the dogs of war, I love this from Milan Kundera: “Dogs are our link to paradise. They don't know evil or jealousy or discontent. To sit with a dog on a hillside on a glorious afternoon is to be back in Eden, where doing nothing is not boring -- it is peace.”