ON SET, ON THE KING'S ROAD.

"Saturday afternoon on the King's Road was a fashion parade..it was like a movie, it was literally a movie in the fifties and everyone was dressed to the nines."

So said Leon Herbert one of the top dancers of the 1970's soul scene in London when I interviewed him for the book. I can remember that feeling too when I first went there as a teenager in the early 1980's. Although it was well past its swinging sixties heyday by then it was still a glamorous outpost. It was where I bought my first suit when I was seventeen from a stall called 'Marvelette' in one of the arcades where second-hand clothing stalls lived side by side with ornamental antique and bric-a-brac dealers. The suit, a flecked grey 1950's copy with one button jacket and pleated trousers cost me £50, a lot of money for the time. As you walked down the King's Road from Sloane Square station it became more and more interesting - about two thirds of the way down the last vestige of  Chelsea Punks hung around outside the Safeway supermarket - and the most interseting shop of all was 'Johnson's -The Modern Outfitters' before the road turned into World's End.

The interior was stylised with a heavy 1950's Americana look yet seemed ultra-modern, walking in to the shop felt like stepping on to the set of a Francis Ford Coppola teen film. It was owned by Lloyd Johnson whom I have interviewed for 'Different Class'. Originally a mod from Hastings by 1975 he had moved on and opened an influential clothes stall in Kensington Market selling demob suits to style conscious Soul Boys and Punks. He is fascinating on the history of men's clothing and youth culture and also very funny. His stall in Kensington became a kind of refuge at a time when Teddy Boys, Punks and Soul Boys were walking the streets and getting beaten up for the way you dressed became a calculated risk. He recalls the routine of his regular customers was " to come to mine in the morning, go over to the King's Road and get the shit kicked out of you by Teds and come back and hide at my stall in Kensington Market. Kensington was the escape after the adventure of the King's Road."  The popularity of plastic sandals, an oddity worn by both early Punks and Soul Boys he attributes to his seaside origins "I was from Hastings so could get loads of dead stock from seaside resorts. Transparent sandals were easy to find but we discovered if you put them in a saucepan and added dylon and bolied them up the dye would take into the sandals."

By the time I had discovered his shop in 1982 Johnson had sold clothes to the best -dressed pop stars including The Clash, The Rolling Stones, Madness, The Stray Cats and Siouxsie Sioux. I never bought anything from his shop, it was beyond my budget, but I can still see the rails and window displays immaculately laid out looking as glamorous and inviting as a classic technicolour film. 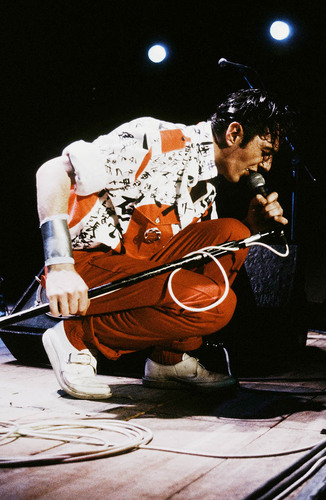 I remember Laurie a fantastic dancer. He set a bunch of his friends to watch me dance one night at a club in Leytonstone called the Lively lady. After that night he would call me up to out just to dance. Keith Fung