Nice Buns - and how to get them! 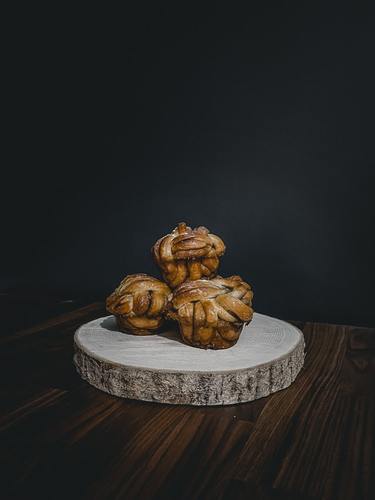 Photo by Scott Gummerson on Unsplash

Sorry, I couldn't resist trying to get your attention ...

Some of you loyal supporters will remember that in July 2017 when Sea Paths was just published, Richard and I swapped homes with Jonas and his family. We lived in their home in Sweden while they came to Chichester. He had brilliantly arranged for us to row a traditional long boat to an island church on the first Sunday we were there and afterwards we had fika once the boat had been hauled back ashore. Here's a photo of some of the oarsmen (I was one, promise, but not in Sunday best like some of the others!) 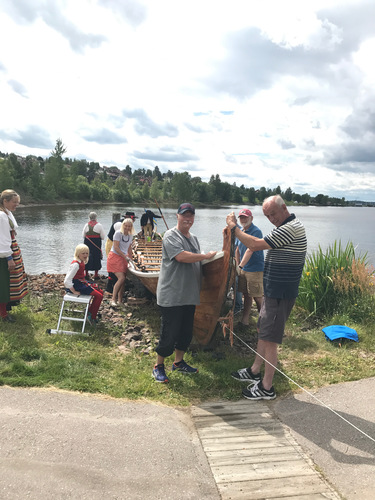 The fika was memorable for delicious cinnamon buns - and Jonas gave me his mother's recipe. I'm ashamed to say that mine were a disaster so before sharing I experimented a bit and here's my version. His mum and I share a taste for less sweetness, with reduced sugar and cinnamon and more almonds and cardomon, but make it your own. So - here's my March gift to you as a thank you and do please share any photos or tips. Thank you Jonas!

His mother’s name was Evy Larsson, born in 1935 in a village just outside the little town of Skövde in the county of Västergötland, 350 km south of Falun (where we stayed). She worked as a primary schoolteacher during her active years.

Her traditional Swedish cinnamon-bun/kanel-bulle recipe will give you 24 large buns.

Some notes first. If you'd like to, instead of mixing the ingredients of the filling as detailed below, you could do it the Evy Larsson way by first spreading the soft butter on top of the rolled out dough, then sprinkling with sugar and cinnamon until it is well-powdered.

1.    Heat the butter, milk and salt in a saucepan until the butter is melted and leave to cool until lukewarm.
2.    Sift the flour into large bowl and stir in the yeast, cardamon and sugar. Make a well in the centre and break the eggs into it. Gently add the lukewarm liquid and stir to form a sticky dough, finally using your hands to mix well.
3.    Work the dough for 10 mins or so. If you like, you can do this on an oiled board but DON’T add any flour (buns will be like old boots). When it’s springy make it a rough ball, place in a clean greased bowl, cover with a tea towel and leave to rise for an hour in a warm place. It should have doubled in size.
4.    Meanwhile, mix together all the ingredients for the filling until it’s smooth.
5.    When the dough has risen, turn it out onto a floured board and gently roll out until it’s a rectangle, roughly half a cm thick.
6.    Spread the filling on top of it and then roll up from one end into a 'sausage'. Slice into 24 even rounds.
7.    Place them onto a baking tray (with baking paper beneath). Or into greased muffin tins, which will make them domed and less traditional. Cover with the tea towel and leave to prove again for about 40 min.
8.    Pre-heat the oven to 200C/180C Fan/Gas 6
9.    Just before putting the buns into the oven, brush them with the beaten egg and then loosely sprinkle with pearl-sugar and chopped almonds.
10.   Bake on the middle shelf of the oven for 7-10 minutes, or until a deep golden brown.

Traditionally they are served only a few minutes later, when they have cooled a little, with a glass of fresh milk, or a coffee. Let me know how you get on - and do share any appreciation by helping me get Landfall out you as soon as possible! If you already have, thank you. I'm always grateful and this year especially.

Let me know if you try them!

The first edition available in EPUB and PDF formats.