Bera told Heggi to steer and went forward to get clean air and think. She was bone-tired. Beneath the hull of her beloved Raven, sea creatures were returning to the empty sea; shimmering and flicking quicksilver flashes that should have made her glad. Instead there was a strange emptiness inside her. She had saved all the beasts of land and air, the settlers and children yet to come - but none of them knew.

Hefnir could have told them.

No, she had been under the shadow of men for too long. Under their shadow and shaped by them, like a wax doll in their own image. First, her father, Ottar, trading her to her enemy, Hefnir, with his son Heggi. And then Thorvald. She shied away from thinking about him.

It’s not only men.

Her skern wagged a long finger of disapproval. Was that right? Her mother might have shaped her if she’d lived. In her absence, there was a mighty presence and Bera felt the full weight of being a Valla and ordinary daughter of an extraordinary Valla.

Look to the living.

Sigrid too had played a part. Could she scent a secret weakness inside Bera, a weakness that would threaten them all?

She needed to get a better grip on her feelings. Her father used to say that women won arguments by crying, so she never let folk see her tears. Even when she was sobbing into the neck of a favourite beast, she would deny her grief. The first big lie. Holding back feeling made a scab that grew thicker with time, leaving her unnatural, unwomanly.

‘He made a noise!’ Heggi shouted. ‘Papa’s choking!’

Only air leaving the corpse. There’s no skern.

Bera went back to comfort her boy and Hefnir’s chest rattled like a chain underwater. He was alive! She and Heggi stared at each other, frozen between hope and fear.

He wants his Papa back.

Bera raised Hefnir’s head and put a spoon of water at his cracked lips. It dribbled down into his beard. He was fathoms deep into the poisonous world of wolfsbane - but not yet in the dark.

‘Lash the tiller on a southerly course, Heggi, keep her heading out to sea.’

‘The wind’s dropped, anyway.’ Heggi came and knelt beside her.

‘I can’t say. But he’s fought hard, boykin, and it might be enough.’

‘Stay with him, talk to him. Give him something to live for.’

‘He’s been under a spell, boykin. Let’s see how he is when he wakes.’

It wasn’t true. The misery around Hefnir was of his own making but Bera already felt stronger with him alive. Hating him gave her energy. She found the small rations left onboard, determined to make him eat something. She chewed a small piece of cheese and then forced his lips open to slip it into his mouth. It was hopeless. Even if she got it in, he would likely choke and there was no swallowing, hardly any breathing. She studied his half-closed eyes, crusted with some secretion of poison or approaching death.

A long time passed and still no breath.

‘Come on, Hefnir, you are aboard the Raven. This boat is more powerful than either of us knew.’

‘Hearing is the last sense to go.’ Had Sigrid told her that, when her mother was dying?

Her skern shook his head. And hope’s flame guttered in the long wait for his next breath. Hefnir, who had ranged the seas to the very edge of the Known World, was first caged in an island and then the boat and now the bars were at the soles of his feet. Bera felt his gaze turn inwards, to the clutch of his heart.

There it came, a shuddering of bones, loosening the chains that bound him to this earth.

Heggi whispered, ‘It must hurt him.’ He took his father’s hand, turning his wrist over.

Dark blue veins bulged against pearl-white skin, coursing all the way down towards his palm. It made misshapen the rough black tattoo that looked like two runes together, T and S.
‘They all had this tattoo,’ Heggi said. ‘On the Serpent King’s boat, all the crew.’

Bera nodded. ‘I saw it before, on your father, and on the folk at the Abbotry.’

‘What does it mean, then?’ asked Heggi.

‘Don’t touch it!’ He looked startled.

‘I wasn’t going to.’ Bera said, ‘ I would rather touch a snake. It’s the tattoo of Brid, that Hefnir earned and Egill did not.’

‘One day I shall find out, Heggi. But the knowledge will not be good.’

‘She is your father’s true god. Brid is three women in one. A poetess, a smith and a doctor. So I’m told.’

‘Will she come and take Papa?’

Her own skern was wringing his hands. Did that mean he was going to live? Or had he truly sent his skern away? Bera’s ribs ached with the terrible rending of losing a skern.

Heggi whispered, ‘He hasn’t made a noise for ages and ages.’

Hefnir was caught out of time, his glassy eyes half open, unseeing.

Close by them a whale spouted a loud hiss and spume of spray. Then silence. It was as if the whole world was waiting for Hefnir’s next breath. But, with no apparent change, Bera knew the moment her husband died.

Whatever it was that made the body Hefnir, left. Something too slight to see properly - but real. Heggi looked at her with wide eyes, mouth open.

She did not mention the keening sadness of seeing the spirit leave alone; that Hefnir’s skern had never joined him. 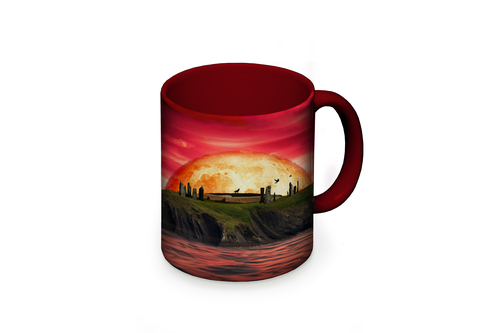