Why Barnard Castle makes Surquedry a word for today 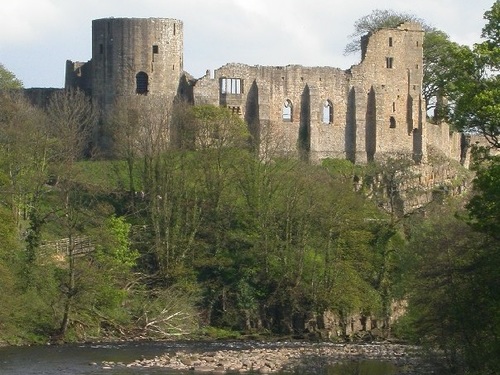 One of the undercurrent themes of the alliterative poetry of the fourteenth century is the notion of "surquedry", a word which is frequently used and is a Middle English equivalent of the French surcuiderie, an overweening arrogance or pride. The poets were critical of this in contemporary mediaeval English government and it has a particular relevance to politics in Britain today.

The latter part of the fourteenth century is defined by the decline and death of Edward III, the premature death of his son (the Black Prince), and the coronation of the child king, Richard II. It is also defined by a shift in society as a consequence of an international pandemic in the form of the Black Death, which placed signficant pressure on the "old order" and led to an increased social mobility in society.

By the 1370s, the glories of Edward's reign were but distant memories and, by the reign of Richard, the kingdom came under the control of protectors acting out their own agendas for their own purposes, be it at home or fighting abroad in France. Finally, in the latter years of Richard II's reign, the king embarked upon a period known as the Tyranny when all kingly self-control was lost for a brief period. This led to the exile of Henry Bolingbroke, who finally returned with a vengeance.

The Black Death itself struck in two major outbreaks, in 1348/9 and the early 1360s. In that period the population of England alone lost between 25 and 45% of its population. The Peasant's Revolt of 1381 reflects an increased anxiety of the peasant classes in England and although the demands of the rebels were comparatively modest, they nonetheless mark a shift in the social order and highlight a need for governmental responsibility.

It is against this background that the poets were writing. It was difficult for a poet to be critical of his or her patron; without their support, they could not make a living. Hence the work of the alliterative poets is nuanced and sophisticated. The role of the poetry was to show ideal behaviours and, by subtle example, to criticise flaws, high amongst which was surquedry.

Surquedry in a sense represents an abuse of power; a contemptuous posturing whilst others suffer. While the Black Death was raging in its first outbreak, Edward III still found time to establish the ornate and inward-looking Order of the Garter. Harsher still, the contemptuous words of Richard II following the death of Wat Tyler at Smithfield and the subsequent suppression of the Peasants Revolt still resound in our ears. "Serfs ye are and serfs ye shall remain. You will remain in bondage, not as before but incomprably harsher" he is said to have exlaimed.

The poets knew that such behaviour was dishonorable and likely to cause further discontent, ultimately denying a monarch the control they sought. Honour, duty and piety were core elements of kingly behaviour and so the poets created richly embroidered stories in which these themes could be ingested by the reader or audience rather than be taught didactically.

Hence, in Sir Gawain and the Green Knight we read of Morgan le Fay turning Lord Bertilak into the Green Knight "for to assay the surquedry, if it be so grand, that speaks of the great renown of the Round Table". The poet is suggesting a surquedry but not stating that it exists. When the Green Knight first arrives at Camelot he exclaims, "where now is your surquedry and conquering power" - he is contemptuous of such behaviour.

In King Arthur's Death, the consequences of surquedry are taken to a whole new level. As Arthur sweeps all before him in a maniacal vanity-fuelled rage, he ultimately sows the seeds for his own demise. After King Arthur dreams of Lady Fortune towards the end of the poem, his sages interpret it as follows:

Challenge her as you will,     you will achieve no more!

You have shed so much blood     and slain many sure men,

Civilians, through surquedry,    in several kingdoms;

Be now shriven for shame     and shape up for your end!

Surquedry is a state to which a king or leader must not aspire. It reflects a level of arrogance and vanity unacceptable to effective leadership and governance. Within it lie chaos, war and mischief.

While history glories in the Order of the Garter and wars in France, it tells us too of suffering. It is hard not to forget the harrowing words of those who were enduring the horrors of the Black Death. Most memorably, the haunting words carved into the walls of Ashwell church in Hertfordshire by a desperate priest in 1361, remembering the plague of 1350 on the eve of its second outbreak when a great storm raged across the land (the same storm which is mentioned in Piers Plowman and which also blew down the spire of Norwich cathedral):

There was a plague
1000,three times 100, five times 10,
a pitiable, fierce violent
(plague departed); a wretched populace survives to witness and in the end
a mighty wind, Maurus, thunders in this year in the world, 1361 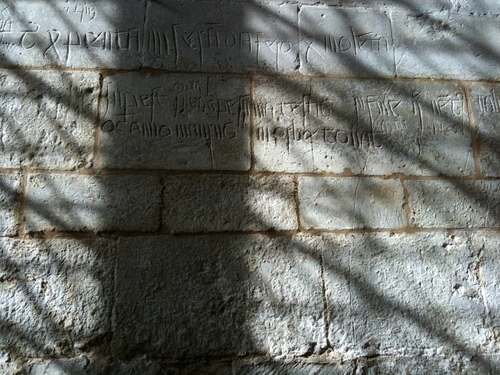 (Above: the haunting Latin text carved into the wall of Ashwell Church)

And so it is that today, in a political climate where thousands have died, where people have endured immeasurable suffering, leaders cannot disown their responsibilities to a higher duty. In the last few days, with the astonishing behaviour of British government officials (which we might see as a mediaeval court) and their unelected advisers (those at that court posturing for favours), we have seen obfuscation, useless justifying detail intended to befuddle, and statements which may or may not be "palpably" true.

We are reminded too of the analysis of criminologists who state that the more a person embellishes a story with detail, the more it is he is trying to hide the truth. Humorously (yet acutely observed) Eminem, in the Dr Dre track Forgot About Dre, appears in the track's video after having burnt down a house, telling a TV reporter "I was upstairs listening to my Will Smith CD". The adviser doth protest too much, methinks.

In today's case of governmental honour and integrity, there is one fundamental truth that rises above the wilful obfuscation - a dishonorable act has occurred, a lack of kingship and moral guidance. What would the poets advise? I feel their choice would be simple: either the adviser resigns or he is dismissed by the king. For neither to take responsibility - and which flies in the face of the suffering of millions - is, they would argue, an act of grotesque surquedry.

KIng Arthur's Death should be mandatory reading for all in power for which no eye test in Barnard Castle is required. The words of Lady Fortune are as true today as they always were. Pledge for your own copy today if you haven't already and help keep surquedry at bay and bring an honour back to governance.

Stay safe out there.

Sir Gawain and the Green Knight - hard copies of my book are currently hard to find but, if you would like one, I have good stocks on my website here