The Alliterative Morte Arthure is a masterpiece of fourteenth century regional English poetry. It has pace, it has vim, it has detail, it has message. Above all it has a poetic delivery which makes it stand high as one of the finest works of literature from those dark days of the Hundred Years War. Its delivery is exemplified by its chosen form: the steady percussion of its alliteration.

The skill of the alliterative poets

The use of alliteration in mediaeval English (and Scottish) poetry experienced a revival in the fourteenth century and was regional in its use. The Alliterative Morte Arthure (so called to distinguish it from other more famous works with a similar title) and Sir Gawain and the Green Knights are perhaps the finest examples of the type but we must not forget works such as Piers Plowman or Winner and Waster among many others. Chaucer, a southern writer, was dismissive of the regions and did not use the method.

There is little argument that Gawain and the Alliterative Morte Arthure (King Arthur's Death - the subject of my latest translation) are the finest works of this period to use the method. Unlike Gawain, King Arthur's Death is less sophisticated in its language, in the complexity of its plot, and in the structure of its metre. But this does not devalue it.

Whereas Gawain plays with several emotions all at once (chivalry, honour, duty, religion, chastity to name but a few) Arthur instead concentrates on telling an epic story - borrowed almost in full from Geoffrey of Monmouth' History of the Kings of Britain - while using alliteration to drive on the narrative. In focusing on one story, the poet is able not only to flex his skills of wordplay but also, subtly, deliver a profound anti-war message where even the greatest of heroes is shown as flawed.

Yet this poem is curious in its alliterative form. Much of the poem is delivered using alliteration based on the initial letters of words in a sentence or using the same sounds (e.g. "w" at the beginning of some words as opposed to an "ou" in the middle of others). Yet, elsewhere in the poem, we see the poet use the same letters or compilation of letters (as in Sword, Sweden, Swing, Swap) not just in one line but sometimes five or more lines.

This may indicate either some kind of game play to out-do fellow poets in the Revival or might represent the poet trying to push himself to new limits. Controversially, it could indicate two poets being involved in the writing of the one poem (which might account for the occasional errors in the poem where a character previously killed off comes back to life).

Irrespective of the method used, the poet still uses the caesura in the middle of each line to lift and drop its metre. This method of writing stretches back to Old English; its sudden reappearance in regional English in the fourteenth century - the Alliterative Revival - may be as a consequence of new laws introduced by Edward III or it might be circumstantial. There could have been people writing in this way for centuries, but little survived until this point.

Irrepsective of the form or the reasons for it, the great beauty of these alliterative poems is in the telling. In the video accompanying this article, I am delivering a short extract from towards the beginning of the poem when King Arthur is dreaming of the conflict between a bear (the Romans) and a dragon (the Britons). You will see from this reading that the alliteration delivers a beat, a movement, a power all of its own.

The challenge of the translator is in replicating the brusque language of this unknown Yorkshire/Lincolnshire writer. Below I show the original (from the Early English Text Society edition) and my translation. There are 4346 lines to work through in the poem!

With yche a pawe as a poste, and paumes full huge,

As my translation currently stands, this reads as follows (with each caesura given):

Then out of the Orient     came forth against him

A black bustling bear     above in the clouds,

With each paw as on posts,     with massive palms,

Repellent and loathsome     were his locks and his looks,

With his legs all bowed     and clad with vile fur

All horribly tangled     and, with his foaming lips,

Was the foulest of figures     that ever was formed!

He bounded and bellowed     and thereafter brandished,

All bustling for battle,     his brutal claws;

He so growled and roared     that he rocked all the earth;

So rudely he rapped      he provoked himself!

I hope you are enjoying my work and that it will be worth the wait when it finally emerges. In the coming weeks, I'll be updating you on everything from my new linocuts for the translation, the production of illuminated letters for the book, and, crucially, the historic detail and context which lies behind it.

You'll know from my translation of Sir Gawain and the Green Knight how much I believe in providing you with what i call a "contextual translation". It's difficult to convey this approach to others who don't know my work but, if you know of others who would enjoy my approach and might like to pledge - or if you would like to upgrade your own pledge to help this happen - I would be inordinately grateful to you.

(below - one of the illustrations from my translation of King Arthur's Death, along with an example of my earlier work - Sir Gawain and the Green Knight) 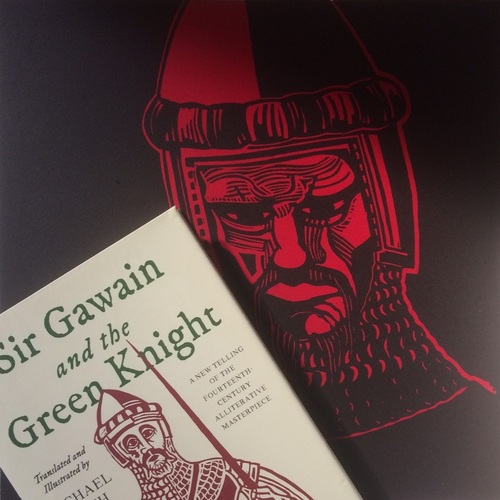 Great to hear you declaim it. Look forward to the book.

Thank you so much for the reading! It was incredible to hear how it would have sounded. :)

Thank you Kim! I can't guarantee it would have sounded like this but it does give a flavour of the rhythm and the alliteration. I intend to do more readings in future updates - so watch (or listen) to this space! Michael

Thank you too for your comments Arnold - and thank you for supporting my work! Michael