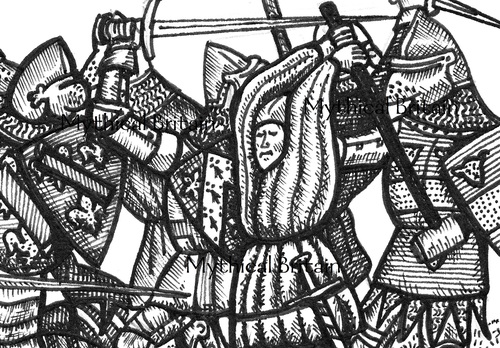 To the untrained eye, the 14th century alliterative poem, King Arthur’s Death might be seen as a simple Arthurian romance. Nothing could be further from the truth. This vibrant, action-packed poem possesses a deep irony - possibly based on the poet’s personal exposure to the brutality of mediaeval warfare - and a detailed knowledge of other poems and sources in the Arthurian canon which he uses to achieve his aims. Let’s look at his portrayal of battle.

Not a typical “Romance”

A casual reading of a typical Arthurian romance often leaves us in no doubt that many of them were fantasy works, celebrating the chivalric idea and the virtues of knighthood. Typically, many drew their inspiration from early works and are structured around earlier plot lines. While this might argue against a rigid observation of contemporary reality, it is the way poets applied their own world to these earlier poems which is fascinating.

In King Arthur’s Death, from the very point where Arthur disembarks his ships at Sandwich, we know that the anonymous Yorkshire/Lincolnshire poet of the Alliterative Morte Arthure, writes with a fine eye for detail. This strongly implies elements of first-hand experience of his own century (which is embelished particularly by his knowledge of warfare, armour and heraldry)..

This contemporary twist adds a real nuance to the poem. His subject might be Arthur, but what he sees is real. King Arthur’s Death is not a typical romance. His subjects aren't really heroes, they are flawed people. They are living and dying among the horror that we now call the Hundred Years War.

This is a "Romance" written for a world grown weary of devastation and destruction. Its fine attention to detail asks us to consider a deeper truth within it.

A society organised for war

Among the many insights into fourteenth century England, the poet of King Arthur’s Death reveals how armies were raised. For example, when discussing with this men how to respond to the Romans, the poet has King Angus of Scotland say to King Arthur:

I shall raise well-trained forces     for your defence;

Paid from my own pocket     to wend where you like

And fight with your foes     that treat us unfairly!

This is fascinating. We know from historic records that knights and bowmen were drawn from all across the land during the Hundred Years War, with different retinues from diverse counties supplying soldiers of all kinds.

The poet’s reference to “well-trained” men paid from Angus’ pocket and within a two month time frame show a detailed knowledge of recruitment and management far more complex than we might expect in a typical Arthurian work. He has a profound knowledge of a society organised for war.

Out in the field

Warfare is especially familiar to the poet. It is certainly true that he absorbs technique and method from an array of sources but he is not simply re-hashing the work of others.

Not only does he know how it is orchestrated, he also possesses an acute observation of armies in the field. It is difficult for us today to imagine a mediaeval host arrayed on the greensward but the poet captures the scene of heraldry and haughtiness perfectly when, for example, Gawain and some others spy the enemy camp:

They heard from their hiding place     a full many hundreds

In palls of purple,     with precious stones;

And pennons and pennants     with the arms of rich princes

Placed in that meadow’s plain     to show all the people.

A mediaeval army on the march must indeed have been a magnificent sight: bright armour, flags, horns, tents and the like. Shakespeare in Henry V evokes such an atmosphere but here we might imagine a real scene, accurately observed by a man in the field.

There is strong poetic embellishment, driven by the techniques of alliterative methodology, and yet there is also a sense of the dislocation of the beauty of colour, and the wonders of nature, with the monstrous awkwardness of military manoeuvres.

However, if the poet knew how society worked and how armies were arrayed, he also knew how soldiers fought. Although he applies the methods of other poets in revealing the horrors of war, there is a strong suggestion that he has seen combat and is repulsed by it. He may well have seen things which few would want to see yet which, like a dark shadow, always loomed in the background of the mediaeval world: violence as wrought by the ambition of kings.

Ywr, while other romances idealise combat, making it seem almost ritualistic or as a literary entertainment, King Arthur’s Death pulls no punches. The bloodshed he describes is not over-the-top; rather it is intimately horrific. When he fights with the giant of Mont St Michel, we see the spurting warmth of bloody gore writ large:

This is a motif used in other sources - the story of Mont St Michel is derivative from the canon - but our poet adds a grotesque sexuality to his work. Where God creates life through intimate relations, kings and knights castrate all that He has made. They are not chivalric. They defile the beauty of Creation:

That he buried his sword    half a foot deep

So the hot blood of that hulk     runs down to the hilt;

He had struck that giant     deep in his intestines,

And just down to the genitals,     gouging them asunder.

There is no romance in these hard words;  we are shown reality. In mediaeval warfare, such wounds were irreparable. Bleeding to death was the norm, not some heroic exception.

But the poet has seen more than single combat, he has also appears to have witnessed the surge of armies and the varying fortunes of massed ranks in the field.

Again, he meshes togehter the techinques of his predecessors, but he writes for a contemporary audience, reflecting a profound and detailed knowledge of the entropy of battle. Here, for example, he describes with astonishing fluidity and vibrancy the confusion and chaos as circumstances change:

So ten thousand men     he assembled at once

And set suddenly about our men     by the salt strands.

Then were Britons abashed     and somewhat aggrieved,

Yet those bold bannerets     and noble bachelors

Break the Roman battle     with the breasts of their steeds;

The Romans then rally     and make better array

And all rush on our men     with their rested horses,

Dispersing those most royal     men of the Round Table,

This is the sort of massed fighting which was typical at least to Waterloo and, indeed, was present during the insanity of Balaclava. We might imagine any general watching from a hill and wondering which way the fighting was going. The poet of King Arthur’s Death was a master of observation.

In this article, I have shown but a small portion of the excellence of the poet’s great capacity for witness. It is dangerous to ascribe an absolute witness to events but we can, I feel, do so here. This poet's ironic approach suggests that he is twisting his own knowledge to add flavour to old stories in order to deliver a profound anti-war message.

Thre is more to come. This is a poem of 4500 lines where we will see so much more: how leaders rally troops; how insults are traded; how sieges were fought, how leaders make mistakes. The poet's coverage - and ironic assessment - of war and warriors is a major (indeed subversive) element of this magnificent work.

I will cover more of this in future updates but I hope I have shown here that the poet who crafted this masterpiece of verve and valour was more than some mere poet. He was a master of mediaeval reportage. He deserves our respect. 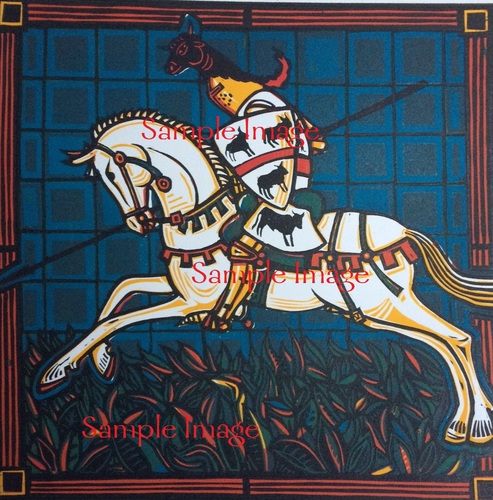 Thank you for supporting my forthcoming translation of King Arthur's Death, your support is incredibly important in helping this new illustrated translation become reality.

My translation of this magnificent 14th Century Middle English masterpiece is currently 42% funded so there is still some way to go in bringing its message to the modern reader.

If you know of others who would like to be a patron of the book, please let them know – every supporter (hardback edition and above) will receive a de luxe edition of the work and have their name in the back in recognition.

And don’t forget, every pledge at hardback and above is entered into the hat to receive an original of one of my full colour linocut prints of Sir Hugh de Calveley (above), one of those very knights who the poet might have seen out there on the battlefield.

Translator, Printmaker, and champion of the Alliterative Revival