The incredibly moving lament of King Arthur for his dead knights

Towards the end of the Alliterative Morte Arthure, the fourteenth century poem I am translating and illustrating for Unbound, we finally arrive at the moment where Arthur fights with, and defeats, the odious traitor Mordred. Here, seriously wounded and on the verge of death, King Arthur makes a speech so powerful and haunting it is spine-tingling to hear it even now, 600 years after it was first written…

Recently, when travelling in North Wales, I made a trip to Castell Dinas Emrys. Here, at one of the finest Arthurian sites in the whole of Great Britain, I took the opportunity to record Arthur’s lament for you, in Middle-English, as written by the original poet (albeit transcribed in the 15th Century by Robert of Thornton). The film is shown above. 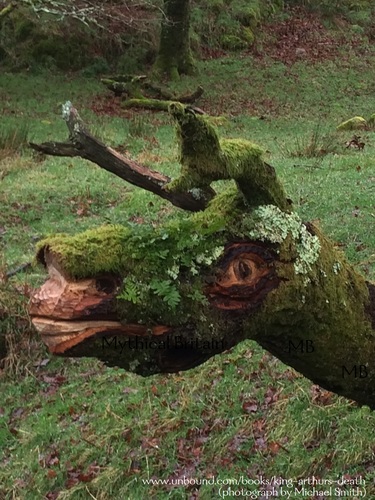 (above: a wonderful tree sculpture by the dragons' pool at Dinas Emrys)

As usual, I had to make the film in one pass and the language is a little rushed; but the huge power and emotion of this astonishing speech cannot be ignored. It makes the hairs on the back of my neck stand up to hear it. In telling of the love of one man for his lost brother knights, this passage must rank as one of the most evocative and moving speeches of any piece of literature from its period.

What does King Arthur's speech say?

Although I was tempted to incorporate my translation of this speech in this update, I think it is so crucial to the finale of the book that I have decided to exclude it. I want to be sure I have captured the language, brevity of form, correct alliteration and the emotion for you. I also want this to be a spectacular moment for you when you come to read the translated work in the flesh.

But a summary of the speech is this: Arthur has just defeated the traitor Mordred but in doing so he has received a fatal wound himself. He nonetheless crosses the battlefield and brings together the bodies of his great knights including Sir Lancelot and Sir Cador of Cornwall. Sir Gawain himself had been killed in an earlier encounter (and the subject of another astonishing lament). He holds the body of Cador, seeing that all has been lost. He cries to Christ, comely King of heaven, and bemoans the loss of his lords, their lordship and their upkeep of his kingdom. He feels like a widow, wringing her hands in despair and spits that the traitor Mordred is the cause of all this before saying that all his life, his joy, his world is over.

Why is this speech important?

King Arthur’s Death, the Alliterative Morte Arthure, is more than just a story. It is a statement of the folly of pride, the errors we make when we follow greed over empathy. This speech, when Arthur has lost all, is a guiding beacon to its readers: how through joy and sharing in a common humanity, we can spread a brighter light. Rather than being a negative story – and it is packed with insights into the horrors, folly and gruesome realities of war - it has, conversely, a wondrous beauty and a profound spiritual message.

King Arthur’s death, this death of the once and future king, is about the permanence of life and the human condition. Through love, understanding and mutual respect, we can live and thrive together. Its message to us today could not be more pertinent.

It is, for all its horror and gore, all its grandness and pomp, all its incisive accuracy and contemporary detail, a moving insight into the human condition, driven by some truly profound thinking and, I might say, some pragmatic thinking too - of a peculiarly English nature. It does not dwell on romance, it tacks a much more meaningful course.

I hope and pray I have done it justice through my work.

Thank you for supporting my work on King Arthur’s Death. Funding for the project is now at 65% with 202 (now 74% with 217) backers (every patron appears as a supporter in the back of every copy of the book - including the standard editions later sold in bookshops and online).

If you know someone who would like to support this book, please do spread the word to others. Remember, you can also choose to pledge but have the name of a friend in the back as a special gift for them!

And don’t forget to check out the new pledge options I have uploaded – you can upgrade your pledge to one of these if you wish, too..

I am very grateful for your support in seeing this magnificent work become reality. It means a lot to me.

PS. Never work with pets when making films. Curly and Dougie are still holding out for a year's supply of Spillers' Bonios as their appearance fee...