The extravagance of mediaeval feasting in the court of King Arthur 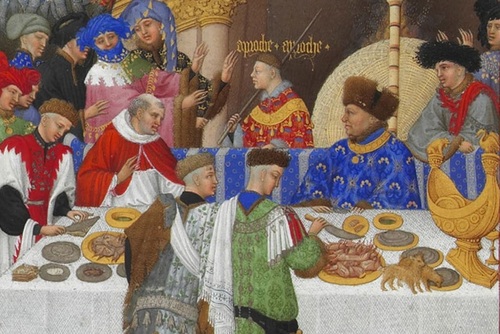 Whether during the holy days, or in celebration of weddings or victories, or as part of welcoming a monarch during their travels, feasting for mediaeval royalty and the nobility was often a magnificent display of wealth and a demonstration of the social order. In King Arthur's Death we are treated to a description of mediaeval culinary magnificence so grand that we can hardly imagine it today...

The concept of a mediaeval banquet

If you were to ask anyone what the term "mediaeval banquet" might mean to them, almost certainly visions will be conjured of lords and ladies surrounded by magnificent food and tucking into game and meat with greasy hands. They might cut off slices from a carcase of a suckling pig; nearby will be a boar's head with an apple in its mouth. Elsewhere, servants in hose will be bringing in trays of wondrous food of all descriptions. Wine will be served into grand metal goblets. A large fire will burn in the grate.

And so it proves to be. The bright illuminations of mediaeval manuscripts (such as the Tres Riches Heures of the Duc de Berry) do not imagine what they depict. When we see such works, we might accept that they are exaggerated but we cannot see them as unindicative.

A key feature of mediaeval eating was that it was convivial but also reflective of society. The king and senior guests would be seated at the high table, other guests are seated at "boards" down the side of the hall, asserting a cohesive social order.

So, in describing the feast laid out for the Round Table at the beginning of King Arthur's Death, we are invited into a place not so much imagined as potentially real; a structured environment. 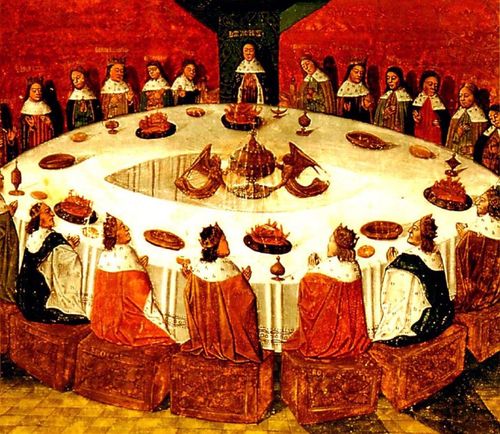 Having set the scene, within that great royal hall, the poet then introduces the reader to the magnificence of Arthur's court as asserted by the food he supplies. As I have translated from the Middle English, we learn of:

Fattened flesh of the season,     with noble frumenty

And all the game you would want for    and wonderful birds,

Peacocks and plovers     on platters of gold...

We know that birds of many kinds were proffered at the tables of such feasts and, as the poet continues, he regales us with his almost unlimited imagination:

Then herons by their plumage     hidden full fair,

Tarts made from turkey     to taste when they liked...

We learn of falcons, curlews and pheasants all brought to the table in rich array. We are compelled to imagine the magnificence of a British king in his prime, and so it continues:

Then comes several stews     most joyously after

In an azure sauce,     that seemed all aflame;

And from the jelly of which     flares leapt high aloft...

This is lordly munificence writ large. And what is feasting without wine? What indeed...

Through most curious conduits     all of clear silver;

Alsace and Algarve wine     and many others...

These are but small fragments of what is lordly cuisine taken to its limits; the poet delights in widening our eyes and stretching our imagination. While the contemporary Sir Gawain and the Green Knight let us dip our toes into the world of mediaeval eating, here in King Arthur's Death, we are introduced to feasting and banquetry of an altogether greater order. This is not so much a feast among friends, it is more like the great royal Renaissance extravaganzas such as that at the Field of the Cloth of Gold. 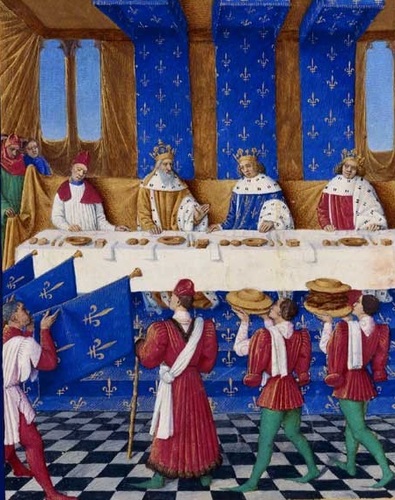 The role of the feast in the poem

And hereby lies a clue as to why the poet lavishes us with such culinary descriptions. This is not so much about food, but about statement. This grand meal (of which I have only selected here a small portion from my translation), is purposely placed towards the beginning of the poem to assert the social order of Arthur's kingdom and Arthur's international reputation.

HIs guests, the Roman emissaries, are unexpected and have unwelcome news, demanding he pays tribute for his lands to the Roman emperor. The poet uses the grammar of the feast to position Arthur in the story for what is to come, pretending to be inferior to Rome while in fact believing the contrary. After the meal is laid out, the king says to his visitors:

“Sirs, be knightly of countenance     and comfort yourselves,

We know naught in this country     of curious meats;

In these barren lands     breeds no such thing.

So without feigning pleasure     please force this food down

And feed yourselves with such pickings     as you find before you.”

Here we see British self-deprecation at its best. Arthur asserts that his own offerings are but those of an impoverished island off the coast of Europe. Of course, he knows full well that such a display is actually designed to impress and, in so doing, to humilate the ambassadors - or at least to assert that here is culture indeed.

Arthur is saying, in no uncertain terms, do not come here and treat us as uncouth. Do not think Britain unlordly, for what I show here is but a fraction of my kingdom's worth. Here is British power.

The feast, being placed towards the beginning of this magnificent poem, has three major roles to play in scoping out the poem for the reader.

Firstly, as a literary device, the feast is incorporated because it is crucial to the plot: it is a statement of lordly elan and power, of the social order, cultural supremacy and ambassadorial ascendancy. So it positions the reader, at the beginning, to understand the power of Arthur, his court, and of Britain.

Secondly, the feast is an evocation of wondrous splendour. It is designed to open the reader's eyes to the sheer majesty of Arthur's court. His court is a magical place, splendid beyond belief. Despite the exaggeration of much of the description, it is notwithstanding an extrapolation of the known: royal feasts were bigger and better than anyone else's. The feast establishes the poem as credible within the social and poltical order of the day.

Finally, the description is personal. The alliterative poets, many of whom (including the author of King Arthur's Death) are unknown, were playing a personal game with each other. They were not only attempting to outdo each other in the range of alliterative techniques, they were also showing off the extent of their control of what was emerging as a rich and cultured national language. King Arthur's Death is a masterclass in the use of English, an assertion of the beginning of its rise as a language in international circles. The liberation of its soul.

While ostensibly a plot device befitting the grammar of many a mediaeval romance, the use of the feast in King Arthur's Death, gives the poem credibility, realism and power. It is just one of the reasons why this magnificent fourteenth century poem is widely regarded as a masterpiece.

PS - Please can you help spread the word to help this book be published? As I write, it is 76% funded with 220 backers. It will be magnificent and a worthy accompaniment to my translation of Gawain. Please help it become real now we're so close to the target - don't forget, you can also upgrade your existing pledge if you wish, with lots of different options to choose from!

Images: all images used in this post are available in the public domain; accessed via Wikipedia and cited as being free of copyright.