The Accountant as Insult in the Morte Arthure 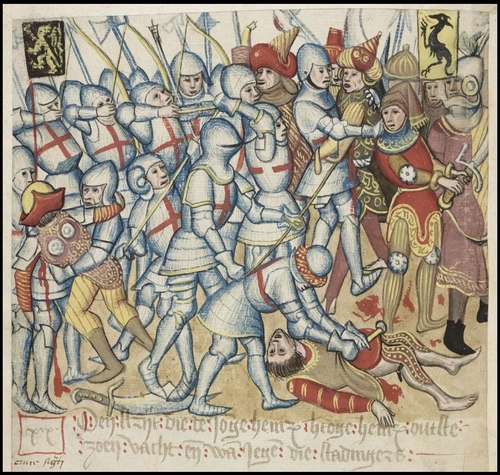 Being written in England around 1400, King Arthur’s Death sheds a fascinating light on the tactics, techniques and sheer plain talking of the English soldiering class around the time of Agincourt. Whoever wrote this astonishing poem was well-versed in how armies were organised and paid for, and, in so being, he highlights a side of warfare which still haunts us today: financiers don’t like fighters.

By the time of Richard II, England’s coffers had been emptied by successive campaigns in what we now call the Hundred Years War. Vast loans had been taken out by monarchs such as Edward III; even in Shakespeare we hear of Richard II desribed, rather wonderfully, as being merely a landlord of England. The reputation of England at this time was as a bellicose player but one whose bluster was tempered by excess, whose silver had turned to brass.

While John of Gaunt (Duke of Lancaster and effectual monarch during the minority of Richard II) urged money for more French campaigns, others were circumspect and campaigns were hugely underfunded. A key feature of warfare during this period was an inability, or the lack of political will, to fund the military – something not unlike today.

Oh No, not an accountant!

In King Arthur’s Death, the poet sheds light on the contemporary feeling towards the financing of war when Sir Clegis confronts the Romans in the great ravine of Clime. Firstly, Sir Sextymour (the Roman leader) insults the Briton with these damning words:

“The array and the royalty     of the Round Table

Are recalled with rancour     in all of our realms,

Of how they all hold revels    with rents due to Rome;

He shall be called to account,     if we are declared right,

And all shall repent     who ride in his retinue

Because of how rashly     their ruler so governs!”

We might imagine in these words a semi-disguised critique of the lavishness of Richard II’s more decadent years. More, the critique is also directed at how governmental funds should be used: with intelligence rather than being squandered, a theme also addressed in the earlier Wynnere and Wastoure, another of the poems of the Alliterative Revival of the fourteenth century.

Yet it is Sir Clegis’ reply which carries a wonderful darkness that still rings true in contemporary Britain: call me any name under the sun, but don’t you dare call me an accountant:

“I can see by your carping     that you seem an accountant!

But be you auditor or earl     or even the Emperor,

… He has reviewed his account     and read all his records,

And will give you this reckoning     which you shall rue later,

That all in power shall repent     who call themselves Roman

Lest the arrears be repaid     of the rent which he claims…”

The Price of Everything and the Value of Nothing…

We might imagine Sir Clegis voicing the words of a latter day Oscar Wilde; money may have meaning but talk of it alone is crass; a cynical view divorced from art and meaning. Clegis is an aristocrat of the old school; the grander vision is more important than those who choose to take it apart with the cool head of an auditor. To him, accountants are the enemy of valour. No one remembers the book-keeper, except when wars are lost.

Clegis is wonderfully violent and his words are acerbic. As well as highlighting the conflict between these two immovable objects of war - capability or cost - he also shows us how nobles goaded each other. We see such when Henry V trades insults with the French ambassadors in Shakespeare; but we see it much more starkly here.

This is brutal English spoken with bloody guts. It is more believable because it runs close to those who spoke it. This is solder's English - born from experience on the field not from working in a bank.

King Arthur’s Death, while notionally a romance, is truly a commentary on a distant time. The money has run low, society has become decadent, yet armies are still expected to fight. In this brief exchange we see the harsh issue facing soldiers of all ages: unless a country is under threat, there are no votes in defence.

It really is a mirror on our times, and demands to be read once more.

Thank you for supporting my forthcoming translation of King Arthur's Death, your support is incredibly important to me.

My translation of this magnificent work is currently 35% funded so there is some way to go in bringing its message to the modern reader. So, rather like Sir Clegis, I claim in my Clime that that while glory may need finance the greater glory is the art!

If you know of others who would like to be a patron of the book, please let them know – every supporter (hardback edition and above) will receive a de luxe edition of the work and have their name in the back in recognition.

PS I'll be appearing at the Bradford Literature Festival on 1st July reading from my new translation of Sir Gawain and the Green Knight (also from Unbound). It would be great to meet you there if you can make it! Details Here