Secrets of King Arthur's Death revealed by the Battle of Agincourt 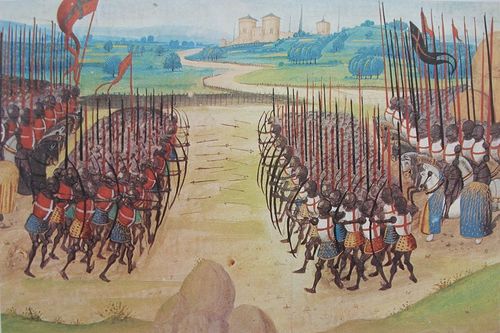 Historians of military tactics in the Hundred Years War have long dwelled on the use of the longbow in battles such as Agincourt, Crecy and Poitiers and how archers were organised to best effect on the battlefield. The use of the term herce by the chronicler Froissart to describe the configuration of blocks of archers in relation to individual "battles" of knights in the English armies has been a particular area of discussion; King Arthur's Death has its own part to play in the debate...

In his ground-breaking work The Medieval Archer (Woodbridge, 1985), Brunel lecturer Jim Bradbury devotes signficant attention to the herce, its meaning and the implications of different interpretations of its use. The “herce” has been variously interpreted as meaning a “harrow” shape (square blocks of archers) or a  “hedge” in the manner of a hedgehog (the battle formation at Agincourt involving archers protected by wooden stakes).

The organisation of archery on the field of battle

In books over the years, "herces" have been depicted on battle plans of famous mediaeval battles as triangles of archers between blocks ("battles") of men-at-arms. Indeed, such a formation was described, uniquely, in the fifteenth century Gesta Henrici Quinti.and is most likely the source of this belief. It is likely that, over time, this has led to a common perception that all English archers were organised in this way throughout the Hundred Years War.

Hence, whether in Burne's The Agincourt War or Oman's classic, The Art of War in the Middle Ages, we are invited to accept that a typical English front line was consistently organised in the same way as follows:

(Here, the projections, the triangles and obliques, represent the archers on the flanks and in "herces" and the lines represent the "battles" (formations) of knights and men-at-arms)

However, the concept of the multiple "herce" triangles and the use of stakes has been questioned. Bradbury has suggested that archers formed on the flanks of the front, driving an enemy towards the central battle as follows:

(Here, the archers are arranged on the flanks in large numbers  with three battles of knights and men-at-arms arranged in the centre)

Dr Matthew Bennett (in Curry and Mercer's The Battle of Agincourt, London 2015) has also supported this approach, and has argued that while some archers may have been displaced along the front of a battle, the majority would have been arranged on the flanks. Indeed, a stylised representation of this formation is shown in the manuscript image at the head of this update.

The use of stakes by English archers

Bennett has further developed this interpretation by questioning the effectiveness of a cuneus of archers against dismounted men at arms, even when protected by wooden stakes. He argues convincingly that the use of cunei of archers would be vulnerable to attack from dismounted men-at-arms, citing the failure of defensive stakes at the battle of Nicopolis in 1361 where such a system was overcome by disciplined infantry. 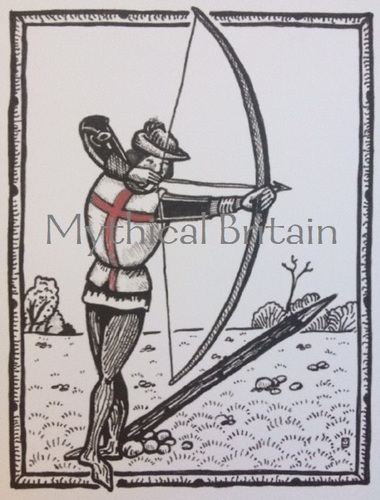 (image: English archer - one of a series of images produced by the author and available as part of a set of 16 cards - 8 different images - in the Agincourt Arthur pledge option)

The use of stakes was not a fundamental feature of English archery in the period. We now know they were a unique tactic employed by Henry V at Agincourt - possibly drawing on knowledge of their more general use at Nicopolis - and was employed in direct response to secret intelligence he received concerning how the French intended to attack his army.

The French plan was to destroy Henry's archers by picking them off using a force of gens de trait (a combined force of archers and crossbowmen). They would then attack them with mounted knights on the flanks before crushing the numerically inferior force of dismounted English knights in the centre of the field.

Henry's genius was in his response to this plan. He understood that his archers needed protection from cavalry attacks while at the same time being able to goad the French dismounted forces to come out into the centre of the field en masse, disrupt their discipline by fire power and destroy them before they had chance to regroup.

By using sharpened wooden stakes, readily prepared and able to be planted or removed quickly, Henry was able to deploy his numerically inferior forces flexibly in response to emerging eventualities. 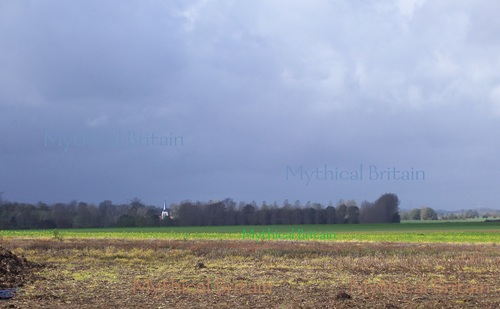 (above: a view towards Agincourt church, taken by the author, October 25th 2009)

The flexibility of a mobile defensive hedge enabled him now to make his famous provocative advance towards the French whilst still maintaining the overall shape of his army: a central force of knights and men-at-arms flanked by archers in one moveable and disciplined formation.

This move - completely unexpected by the French army - was an astonishing act of bravado. In enabling his archers now to hit the French at long range, the plan worked with deadly effect by pricking the arrogance of the French aristocracy into action and causing them to abandon the well-crafted plans of their more experienced military leaders. They attacked the English head on in one ill-disciplined assault.

By forcing the enemy to advance towards him en masse, Henry's tactics caused the French now to come under fire from enfilading arrow storms from the flanks. Flinching from the drubbing rain of arrows on both sides, the French compressed themselves together in the middle of the field and, with the sun in their eyes, began to stumble and fall in waves before even reaching the English lines.

In the damp, unploughed mud in the fields around Agincourt on 25th October 1415, many simply drowned or were crushed to death.

Can we date King Arthur's Death from what it tells us about English archery?

In one fascinating passage, the Alliterative Morte Arthure, King Arthur's Death, confirms the notion that archery traditionally formed on the flanks; suggesting indeed that the poet was well acquainted with military methodology of the time. His description of the army under Sir Valiant of Wales (a curious choice which makes us think of Dafydd - "Davy" - Gam at Agincourt), highlights the deployment as follows:

And so the king chooses him,     as chance befalls,

To be chief of the charge     with his chivalrous knights,

And makes this known by mouth     to those he most trusts;

He will most honourably     command the middle ward,

And form up his foot soldiers     as best he thinks fit;

At the front, in the fore ward,     the flower of his knights;

He then charges his archers      to form on each flank,

And shape up in schiltrons     to shoot when so ready;

He arrayed in the rear ward     his most royal knights,

The most renowned ranks     of the Round Table

When we read this description, we can see that the anonymous poet fully understood the concept of using archers on the flanks to compress the enemy in the middle and render their defeat more likely.

The question for us is whether King Arthur's Death is a reflection of Agincourt or a more general knowledge of English archery tactics. If the former, with its specific layout of an entire army in this fashion, we might see the poem as dating some time after 1415.

However, we also know that conventional methodology, for example at Crecy (1346) and Poitiers (1356), was for an individual "battle" of knights to have its own sets of flanking archers; in such a fashion, battles laid out on the field may well have had archers interspersed between them in the manner of Froissart's "herces".

Yet the poet appears to be suggesting that the deployment of archers on the flanks of the army as a whole was more common than we might imagine; this is a fascinating observation. At Crecy, indeed, Edward III with his prize knights, stood at the rear, ready to assist when needed, in a manner not dissimilar to the plan described here by the poet.

While this makes it difficult to adduce a firm dating for the poem, what we can say with certainty is that the Arthur-poet was a man well-versed in the battle deployment of English armies in the fourteenth and fifteenth centuries. Whether we see Henry's deployment at Agincourt as a consequence of local geography (woods on each side) or as part of a longer tradition of archery on the flanks, it is clear that the use of enfilading fire was a significant part of English mediaeval military thinking; significant enough for the poet to know of it.

Either way, the Arthur-poet appears to have seen war and all its horrors. As we have seen elsewhere in my other updates, his attention to detail and close observation of the cruelty of warfare makes us consider again that this poem in the end has a profound anti-war ethos. It is worth remembering that the use against Christians of crossbows, slings and bows in general was banned by Pope Innocent II in 1189. As the poet goes on to say:

Thereafter most boldly     the bowmen of Britain

Battled with brigands     from afar in those lands

With fleet flying arrows     they shot fresh at those fellows;

Those feather-fletched shafts     pierced through the fine mail;

Such warfare is foul     that so stabs at the flesh

Of the flanks of steeds     when fought from afar

Once more, through quiet means, our poet tells a different tale, if we choose to decode it. In the modern parlance, the bowmen of Britain were akin to a drone strike: the damage is done without any great conscience.

Pledge - or upgrade your pledge - today!

King Arthur's Death is an astonishing poem of great realism, craft and beauty. Many reading this update will have alreadty pledged for my translation of King Arthur's Death. This new translation, illustrated with over 30 of my own linocut prints, can only be published if we can raise the funds (56% funding pledged already from 181 generous patrons).

If you would like to help it be published - or want to upgrade your pledge (perhaps to the Agincourt Arthur pledge reward with 16 special cards?) I would be honoured by your support. More, because the 25th October marks the 603rd anniversary of the Battle of Agincourt, any pledge or upgrade received before the end of the month will save 15% if you use the code AGINCOURT 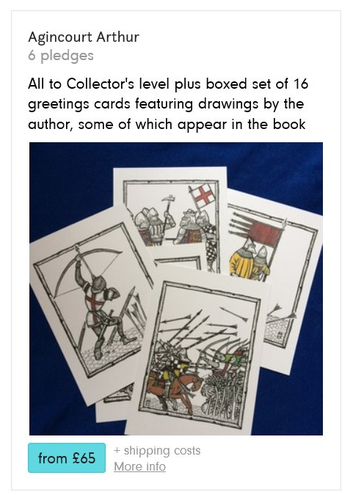 Thank you once again for supporting my work,

What every pledger receives:

Wehn you pledge as a supporter of King Arthur's Death you are not only helping to support the translation of a new edition of the poem, richly illustrated with my own linocut prints and packed with notes and explanatory text; you will also receive:

A unique limited collector's first edition of the book - different to the versions sold in the bookshops, and featuring:

Not forgetting your name in the back in EVERY edition of the book sold showing you as a patron who helped make the book happen!